Girls Recap: Season 3, Episode 31, I Saw You
Skip to content 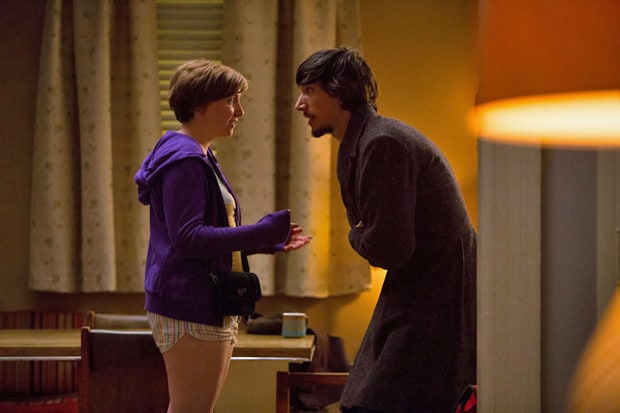 For this Season 3 penultimate Girls recap, we turn to Morrissey and his song “We Hate it When Our Friends Become Successful” which could basically serve as the Girls theme song at the moment. There’s always been a strict hierarchy among our gang, but Adam and even Jessa are busy usurping Hannah and Marnie this week. This power imbalance is accompanied by harsh realizations and exposed secrets, but luckily, we had Elijah providing comic relief for some levity. I swear there wasn’t a moment he was on screen that I wasn’t cracking up.

At first, Adam and Hannah’s separation doesn’t seem to be sticking, as we open with them having normal, vanilla, non-scary lingerie sex. It quickly becomes clear, though, that Adam is still staying over at Ray’s for the time being, so he can focus on his acting role and not Hannah’s “drama.” He tells Hannah “It won’t always be like this,” and Hannah pretends she’s okay with it. She can’t even make it a whole night without him, though, and shows up at Ray’s where Adam is running his lines; her lame pretext is that she’s worried Ray won’t have the one and a half bananas Adam likes for breakfast. Except she didn’t bring any emergency bananas or anything – tropical fruit subterfuge fail, girl.

Adam reiterates that when he looks at Hannah, he sees “play time” and he needs to be focusing on his work right now. Which, fine, fair enough, but relationships are about balance and integrating work with play – unless you’re in a Tim-Burton-and-Helena-Bonham-Carter-separate houses-situation, in which case carry on. Adam drops Hannah back off at her place and oh so sensitively says, “Someday you’re gonna have something major going on, and you’re gonna understand why I need this time for myself.”

Now, Hannah definitely has her faults, but let’s remember that her e-book was major, and her actual book was REALLY major (at least until David’s demise) but she still took a job working for the man in order to pay the rent. She was willing to fit her writing, clearly one of the most important aspects of her life, around her relationship with Adam, and yet he seems completely oblivious. Major relationship red flag y’all; can both people in a relationship be the artistic top dog? As we’ve seen so far, pretty doubtful.

The indomitable Patty LuPone simply confirms this sad truth; Hannah still need her bone-density quotes, so she heads over to Patty’s house to finish their interview and gets a bit more scoop than she bargained for. Elijah accompanies her, because he as he says, “I really want to meet f****** Corky’s mom.” Over drinks, the LuPone’s own marital dynamic is revealed: Patty’s CUNY professor husband abandoned his writing career to support Patty, a decision that basically changed his name to “the little man.” After this revelation, you can just see the horror etching itself onto Hannah’s face.

Accordingly, during a GQ staff meeting the next day, Hannah acts like a complete spoiled brat and returns to her theme of “lets-eviscerate-every-single-one-of-my-coworkers-for-not-being-real-artists-anymore.” Mid-rant, she’s cut off by her editor, who promptly fires her. This is Hannah in her typical self-involved dream world; can’t everyone see that they should want their life to be brilliant and radical and exciting every minute of the day? Hannah even pulls the whole “you can’t fire me because I quit,” and then she storms out, except for the awkward part where she has to squeeze through the office doors.

Marnie, too, is feeling the sting of being undermined by the “talent” of her friends – she’s working at her new gallery job when Jessa breezes in and lands a job with a showcased artist in literally two minutes flat. Marnie went to Oberlin, you guys! She knows art! But all Jessa has to do in flash her leg, claim she’s not a junkie thief “anymore” and BAM – a position as an archivist falls into her lap.

Luckily, Marnie still has her open mike night with Desi to look forward to. Desi has already warned her to not act the way she did in her Edie Brickell video, so she’s pretty nervous, but she manages to call Desi out on the current of attraction running between them beforehand. At least, she tries to, but Desi condescendingly reminds her that he has a girlfriend. As she takes the stage, Elijah stage whispers to Hannah and Shosh: “This is gonna be a total shit storm…MARNIE! WE LOVE YOU!” But quelle surprise…Marnie NAILS IT! She sang beautifully, with none of her usual doe-eyed, painful posturing.

Midway through the performance, Shosh turns to Hannah and remarks, “Adam’s about to be on Broadway and Marnies’ clearly meant to be a pop star and, I don’t know, you were like supposed to be the famous artist in this group.” As usual, Shosh articulates precisely what’s happening, even if Hannah is loath to accept it.

After the show, Desi’s girlfriend shows up and Marnie clearly feels awkward. She claims she is going to tutor homeless kids (you’re the world’s worst liar, girl), so she can’t join everyone for drinks. Really, she goes to sleep with Ray, who is reluctant but just can’t help himself. And amidst Adam, Desi and their theater friends, Hannah proudly proclaims she really wanted to get fired, and she succeeded in her goal. They’re not impressed.

When Adam takes Hannah back to Ray’s, Hannah is distracted by the loud moans coming from Ray’s room. I don’t know who does this in real life, but Hannah takes it upon herself to whip open Ray’s door and catches Ray and Marnie in the act. Marnie sputters out, “He made me!’ (girl, WHUT??!!) and Hannah snarls to her, “You will never judge me again.” Oh, man, I thought Ray and Marnie might have gotten away with their secret dalliance, but I should have known better.

With only one episode left to go, there’s not a lot of time for reparations. It seems like there’s only room for one big “star” in the Girls firmament – who is going to plummet into a black hole, instead?

Fashion: There is no doubt in my mind that Elijah rocked it this week—who else looked like a “f****** Kennedy,” after all? Bowtie and everything!

we heartsters – Did Elijah having you rolling, too? Wasn’t Marnie actually GOOD? Should each of these characters just move to their own private cave where they can be artistes all by themselves?

Photo and video via HBO