Bowie’s “Space Oddity” is the perfect (albeit ominous) song to close out this episode; our SC&P survivors are unmoored in the vast universe of McCann Erickson, and some of them won’t be coming back. As painful as this is, especially for Joan, it also feels apropos—some people just have to blaze their own trail. And this new path charts a pretty clear trajectory as we hurtle towards these last two episodes; only Don’s fate, per usual, remains cloudy.

As everyone begins the McCann transition, some are finding it easier than others. Harry is so excited that even Roger can’t knock him down a peg or two, and Pete is secure in his position as VP. But Shirley, Roger’s secretary, won’t be coming along—as she tells Roger, “Advertising is not a comfortable place for everyone.” In her specific case, she pointedly means “not a comfortable place for women of color”—and as we find out, there’s no welcome mat out for any women, period.

Peggy can’t even make the transition yet; her new office isn’t ready, and to add insult to injury, she’s gifted with an insulting “welcome, new secretarial girl” bouquet of flowers. But this affords us a wonderful opportunity to watch Peggy and Roger, as the only two left standing in the SC&P offices. It also graces us with some true Mad Men weirdness, those little touches of surrealism that enrich the norm. Here, it comes in the form of Peggy as horror movie heroine: as she pads through the empty offices, hearing the creepy strains of faint organ music, she tentatively calls out “Hello? Is anybody there?” There’s no ax wielding maniac running amuck though; just Roger, loathe to relinquish the ship he’s sailed upon for so long.

Over Cinzano vermouth (no doubt left over from the shoot during New Business), Roger regales Peggy with Navy anecdotes and gives her some tipsy advice, and he gifts her with a terrifying Japanese print that belonged to Bert (this won’t be the first time we see Bert this episode). It’s not often that Sterling and Olson have such a long conversation; as Peggy points out, “You’ve never given me this much attention before.” Never underestimate the power of vermouth, people. And in a fittingly weird, hilarious and perfect way, the two give the last SC&P performance ever: as Roger accompanies her on the organ, Peggy flawlessly roller-skates through the empty rooms, arms out flung. When she finally makes it into the McCann offices, she slow-mos through the halls in classic Ray Bans, smoking a cig and clutching her octopus print like a true boss. We know her reception there is bound to be super bumpy, but something tells me Peggy will land on her feet. “Ground Control to Major Tom: your circuit’s dead/there’s something wrong”

For Joan, every suspicion she had about McCann is right as rain. It begins with female employees desperate to “share the crumbs” of her accounts, and only gets worse when she has to work with Dennis, the sexist bro that belittled her over Topaz. It’s clear Joan won’t be getting actual assistance; Dennis is essentially there as her babysitter. When Dennis blatantly insults the Avon exec and Joan dares to correct him, he snaps. Joan appeals to Ferg for help, and his “solution” is to essentially proposition her. I mean, I thought Dennis was the worst, but Ferg is THE WORST.

A distraught Joan confides in her boyfriend Richard and he advises her to play hardball if necessary. So she does; at first, she attempt to reason with Jim Hobart, but things quickly turn ugly. It becomes clear that Hobart couldn’t care less about Joan and her partnership; she’s just another skirt to him, and any voicing of her opinion quickly renders her disposable. But Joan’s not going out like that; she makes good on her promise to “burn it down” by threatening to expose the sexist practices of the firm via lawyering up and informing the ACLU. She even evokes the holy name of our Lord and Mother Betty Friedan. Hobart offers to cash her out, for an insulting fifty cents on the dollar—if he never has to see her face again. So remember when I landed on Ferg being THE WORST? Nope, Hobart is the KING OF WORST.

The sad resolution is when Roger comes to Joan the next day—even he can’t fight for Joan the way she deserves. He tells her to take the reduced offer; it’s the best she’s gonna get. Resigned to her fate, Joan accepts the offer. It’s absolutely egregious; as hard as Joan clawed her way up, she’s knocked down in an instant. Yet, this whole thing underscores one of Joan’s best qualities: her strength. She knows when to fold ‘em, and she’s got true grit. Like Peggy, she’s a cat that will land on its feet.

As for Don, he plays the McCann Erickson game at first, although when we see his social security card, it’s an augury that Dick Whitman is still alive beneath the façade. Initially, he performs admirably, tolerating Jim Hobart’s “you’re my white whale” speech, suffering through Ferg’s abominable impression of him/Nixon and even proclaiming, “I’m Don Draper of McCann Erickson” through a fake smile. But when he participates in a directorial lunch meeting for Miller beer, it all starts to fall apart.

There’s something vaguely creepy about that meeting—the up and comer spinning a mythical monologue about diet brew, the men’s choreographed dance of flipping charts and holding executive pens against a backdrop of shiny Coke cans and white lunch boxes. 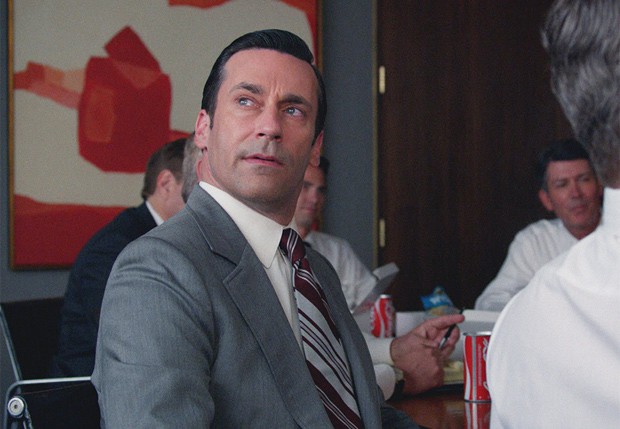 Don watches a jet track its way across the sky—it’s going somewhere, and it prompts him to action. He gets up to leave, and Ted watches him go, the tiniest of smiles etched on his face. We all knew a Don defection was coming; it isn’t in him to be a worker bee in the hive. I didn’t foresee, however, a second materialization of Bert Cooper; he shows up in Don’s car and the two have a Jack Kerouac moment. Bert quotes the line “Whither goest thou, America, in thy shiny car in the night?” and it’s basically perfection: the shiny car is advertising, it’s desire, it’s motion, and right now it’s Don Draper, getting the hell out of Dodge. This shiny car has an objective, though: find Diana. Don ends up in Wisconsin, and tries to con Diana’s ex-husband out of her new location. Diana’s ex seems shell shocked and tells Don that lots of men have tried to track her down. According to him, Diana has the devil in her: “She’s a tornado, leaving a trail of broken bodies behind her.” He urges Don to have a come to Jesus moment, and in Don’s own way, he does: he just starts driving, America laid out before him in all her empty splendor. He picks up a hitch hiker and agrees to take him to St. Paul, which means he’s going westward, of course.

Is this just another break from responsibility, Dick Whitman taking over Don Draper? This may be yet another iteration of what Don does best—run away. Or perhaps it will be different this time…let’s end on another “On the Road” quote that seems apropos: “The one thing that we yearn for in our living days, that makes us sigh and groan and undergo sweet nauseas of all kinds, is the remembrance of some lost bliss that was probably experienced in the womb and can only be reproduced (though we hate to admit it) in death.” Whether this is the advent of symbolic death for Don Draper, divorcee and ad exec, remains to be seen. More musings:
*How sweet was Don’s ‘Knock ‘em dead, Birdie” to Betty? It thrills me, I must admit, to see her buried in Freud—at least she’s trying to fulfill herself, and I hope she knocks ‘em dead too.

**It seems so fitting, near the very end, that Don is essentially working a con on his travels—you just can’t take the con artist out of the man, I guess.

***Fingers crossed Peggy meets up with Stan next week (I can’t wait to hear his comments on her octopus art).

we heartsters: Have you ever seen anything as perfect as Peggy and Roger’s roller-skating extravaganza? What will Joan do next? And any Don predictions?