Mad Men Musings: Man with a Plan
Skip to content

Mad Men is back! If you’re a fan, join us regularly for Mad Men Musings – a space to discuss selected highlights, low points, or just plain water-cooler worthy moments of each episode. 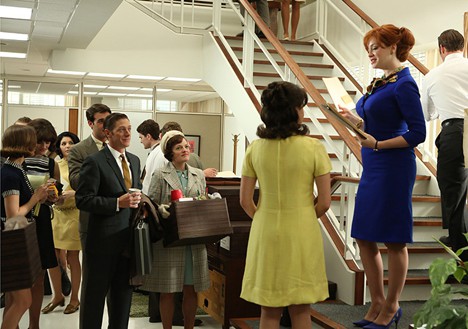 Change continues to sweep through the newly merged office of…well, we still don’t have a name for the new mash-up of SDCP and Cutler, Gleason and Chaough, do we?

This whole episode made me feel vaguely nervous – movers swarming around like worker bees, the imminent threat of lay-offs and firings, and the generally turbulent atmosphere kept me on edge. The power paradigms are shifting, leaving lovers, family members, and co-workers struggling to find their place in the new order. 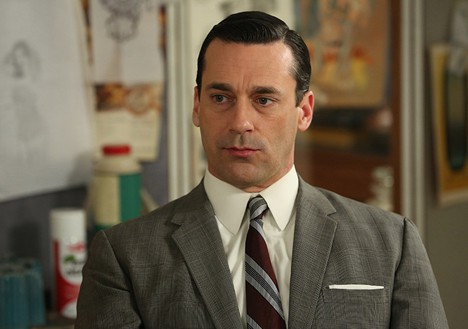 The award for most desperate to assert their authority and find their footing goes to Mr. Don Draper, of course. Don’s need for control and dominance rears its ugly head in both the office and the bedroom. At work, he wants things to stay the way they are; he’s comfortable napping, drinking, and pulling pure magic out of the air at the very last minute.

But Ted doesn’t work that way – as Don’s foil, Ted is engaged, personable and professional. He’s the anti-Don, really, (except for that little echo of the extramarital kiss) and an enjoyable part of this episode was watching the power struggle betwixt the two. 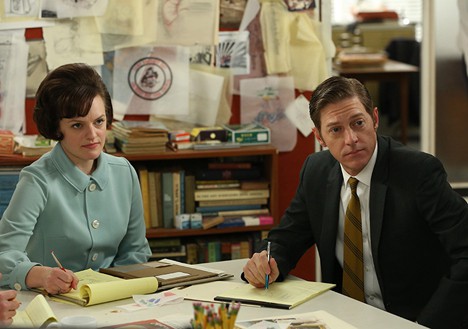 Ted and Peggy ready to face the day…

Don won the first round. Ostensibly making a mea culpa for his lateness to the margarine meeting, Don plies Ted with a liquid “olive branch.” This leads to a rumpled, red-cheeked Ted comparing different margarine brands to Gilligan’s Island characters and generally acting the fool. Peggy, for one, is not amused. In a brief but powerful scene, she calls Don on his crap, “Move forward,” she tells him. Peggy will always be grateful to Don, but part of what makes her such a strong character is that she’s not afraid to confront him when he needs it. 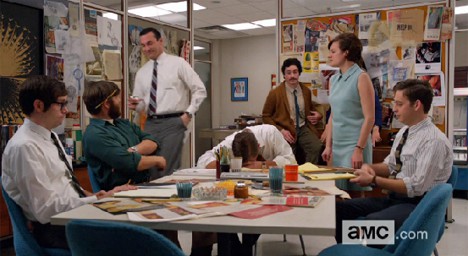 Poor Ted, after his liquid meeting with Don

Sylvia, too, is finally able to set Don straight, but it takes her quite a while to reach that point. Mr. Draper is transparent as glass here — Don needs to re-assert that he has total power and control over something in his life, and an unhappy housewife is just the ticket. Now, this might be an unpopular opinion, but I didn’t find Don sensual or powerful or remotely enticing in this context. Rather, he seemed desperate, almost pathetic. His commands to Sylvia, the whole sordid little game of master and slave, struck me as hollow and cold. (Aside: I did, however, squeal “oh my gosh, Adam and Natalia from ‘Girls’!” when Don told Sylvia to crawl on her hands and knees. Was that just me?) 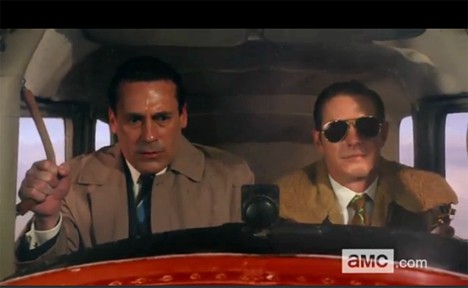 Dominant Don faltered, though, once he stepped onto Ted’s plane. He was physically shaken (just looking at that tiny cockpit shuddering and banging through the storm was terrifying, right?) but his confidence, his essential Don Draper-ness, was shaken up too. Ted, wearing a bomber jacket and classic Ray-Bans, won this round — flying your private plane to meet your client? Check and mate, Ted, check and mate. 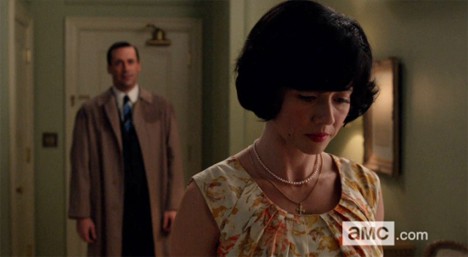 When Don later retreats to the sanctuary of the hotel room, Sylvia, too, finally asserts her own power. She had a dream that is ripe with symbolism: faith, commitment, shame, sex, death. And just like that, she comes to her senses: “It’s time to go,” she says, her modest floral dress signaling her return to the “real” world. Their departure in the elevator was a perfect tableau of displacement and loss; two people in such close proximity, yet worlds away from one another.

This isolation was nicely mirrored when Megan tells Don she wants to take time off from work. As she talks, smiling at him with forced hope, her voice gradually fades away – unable to penetrate his mind or heart, she has become white noise, a mouth that moves brightly but says nothing. 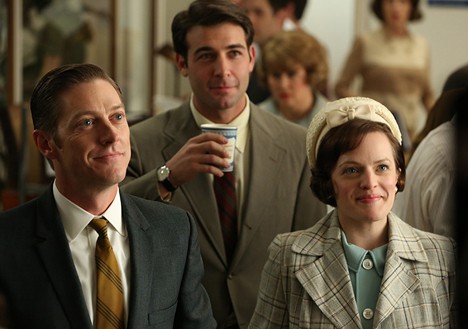 Even as Megan continues to lose her voice, however, we saw another character gain his: ladies and gentlemen, the mysterious Bob Benson! Could it be…is it simply possible that Bob is an authentically kind and caring man? Prior to this, we’ve seen Bob as an eager beaver with murky intentions, but here he was Joan’s knight in shining armor.

It’s possible, of course, that he was just trying to save his own bacon (last hired, first fired and all) but he was so kind and helpful to Joan – the way he helped her save face at the office, his masterful finessing of Nurse Ratched, and, of course, the sweet surprise of checking in on Joan afterwards, gift-wrapped football in tow. I’m going with Joan’s mom on this one: “He’s adorable.” 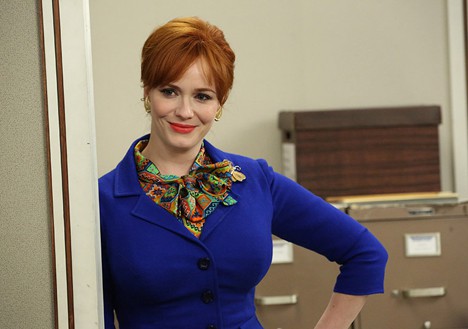 Despite Joan pooh-poohing her mother’s intimations, she subtly saves Bob’s neck from the chopping block. Good thing, too – I’m very excited to see what might develop between these too. Honestly, when you compare even the little bit we know now about Bob to Roger and her rape-y ex-husband Greg, Bob is looking like the best thing to happen to Joan in a long time.

Not so adorable? Pete. His office standing is looking a little shaky, what with his imperious demands for chairs, Don and Ted going over his head, and his dementia-stricken mother setting tea kettles on fire. In typical Pete fashion, he lashes out at the perceived less-powerful around him; his mom, his brother, and his secretary. Between the still-smoking wreckage of his home life and the changes afoot at the office, something tells me Pete is in for a bumpy ride.

Clearly, so is everyone else – the episode closes on Robert Kennedy’s assassination. Megan watches the news, crying, as Don sits down on the bed, straightening his tie. The corny-bright sounds of “Reach Out of the Darkness” play as the world, once again, shivers and shifts.

we heartsters – Were you struck by the fact that Joan was literally in mortal agony and yet felt she couldn’t leave work? Is it just me, or is Peggy’s hair getting bigger and bigger every episode? And am I alone in thinking there is something vaguely appealing about the Harry Hamlin character? (I think it’s the geek-chic glasses).

7 thoughts on “Mad Men Musings: Man with a Plan”