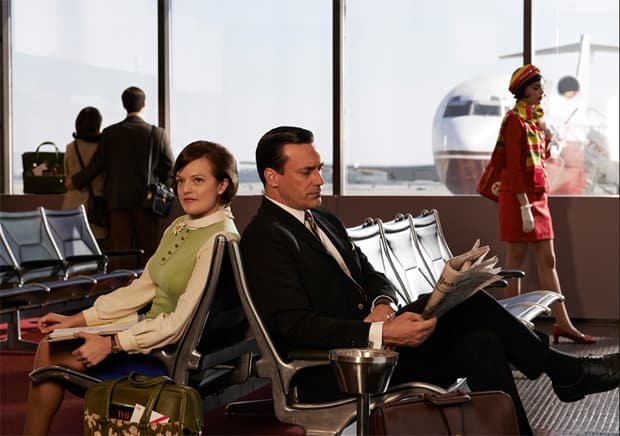 “Are you ready? Because I want you to pay attention. This is the beginning of something,” intones Freddy Rumsen, opening the premiere episode of the final season of Mad Men. As meta as this dialogue is, Freddy is really – what else -pitching copy for Accutron watches, but he’s right. It’s the beginning of the end, actually, and the coyotes are howling in both Cali and New York.
Not to raise any Biggie vs. Tupac beef, but let’s get bicoastal:

East Coast: Freddy’s pitch, a surprisingly good one, is to Peggy. He’s freelancing for Sterling Cooper & Partners, and Peggy seems to be in charge. Except, she’s not – the big boss is Lou Avery, who wants to get the work done and get out. Peggy, being Peggy, has control issue over the Accutron copy, but the more she tries to sway Lou towards Freddy’s tagline, the more resistant Lou becomes. 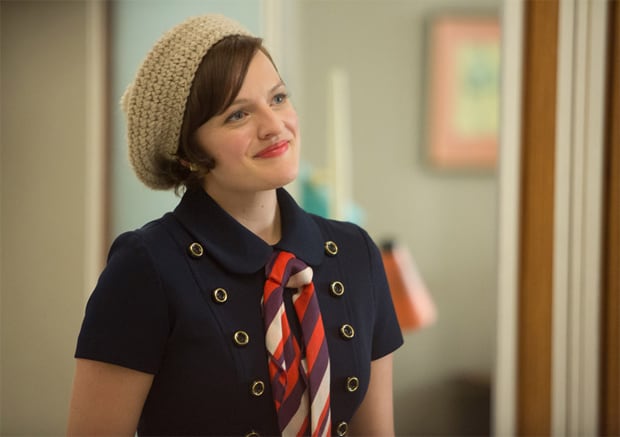 Even worse, she has a run-in with Ted, stopping in from LA. After snapping at Stan and dealing with an angry tenant’s clogged toilet, Peggy ends up wracked with sobs in her apartment – she’s deeply, grievously alone. Those symbolic pants she was wearing last season? Apparently, they weren’t the perfect fit after all. Oh, and that smooth copy Rumsen delivered? Yeah, that was from Don – even though he’s persona non grata at SC&P, he just can’t let it go.

Roger, on the other hand, is into a different kind of “work”; he’s basically squatting in a hotel with a bunch of hippies, and it’s all kind of squalid and weird. He’s also putting in zero time at the office right now – running a mini-commune is a lot of work, I guess. His daughter calls and asks him to brunch, where she proceeds to tell him, “Daddy, I forgive you,” in that creepy, can-I-talk-to-you-about-our-Lord-and-Savior kind of way. That kind of talk never bodes well.

Stretched very thin is Ken Cosgrove – and he’s being a real jerk. I mean, having to run accounts practically solo is no cakewalk, especially with an eye patch, but c’mon, Ken – screaming? Demanding buttered rolls? Talking down to Joan? He asks her to deal with a Butler Footwear exec, because “This is a hierarchy, don’t you understand that?” In that hierarchy, he’s treating Joan like she’s still in the secretarial pool, rather than the partner she is.

When Joan meets with the exec, he’s patronizing and dismissive, but implies Butler is going to move their advertising in house – no SC&P account. The ever resourceful Joan, determined to change Butler’s mind, meets with a business school prof to talk strategy, and there’s a heart-in-throat moment when it seems like he’s propositioning her (Jaguar déjà vu.) Luckily, he’s not, but he’s still totally patronizing, quelle surprise. Joan manages to buy some time with Butler, but Ken isn’t appreciative – HE THROWS JOAN’S EARRING AT HER.

West Coast: Don flies out to visit Meagan, and he looks so…anachronistic. There’s a long moment of Megan walking from her car towards Don, all beauty and youth – out here, she’s the one in the driver’s seat. They go to an awkward dinner with Megan’s agent, who subtly negs her about “fixing her teeth” but also drops the news that she got a call back for an NBC show. Much champagne ensues. 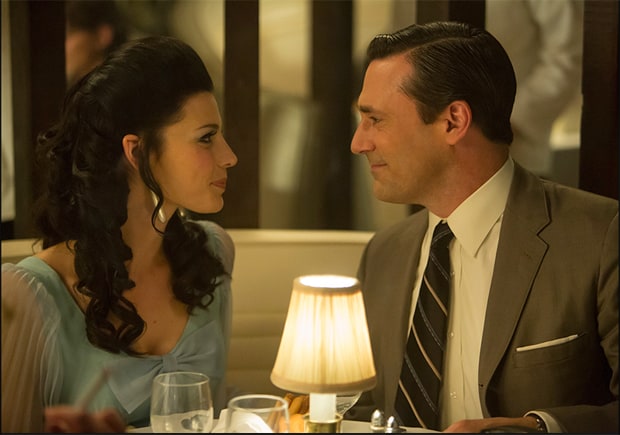 At home in the hills – and everything is so very dark there, right down to the chilling howls of coyotes – Megan gently rebuffs Don and passes out. The next morning, she’s off to class, and she thinks Don is off to work in the LA office…Don still hasn’t told her that he’s been suspended.

Instead, Don meets Pete for lunch (at LA institution Canter’s Deli!). Clad in plaid pants and a golf sweater, Pete is happy, charmed by the Cali “vibe,” and frankly it’s all a little disconcerting. I mean, he only complains like one time at lunch. Back at Pete’s apartment, Don makes eyes at Pete’s girlfriend/realtor and accepts her card. Later that evening, Don has a giant, ugly TV delivered, and Megan starts to fight with him but realizes they don’t have time to argue, as Don’s leaving the next day. They’re finally intimate, but Megan is “nervous.” The dynamic between the two of them is definitely weird and off-kilter, continuing the unraveling of last season.

On the plane back to New York, Don’s seatmate is a gorgeous brunette, played by Neve Campbell. Now, call me crazy, but this whole interlude seemed strange, almost dreamlike. After all, California seems to have a dark magic over Don – reality seems to bend and warp. The two cuddle up and get cozy, and at first it seems like Don’s up to his old tricks.

His ardor is kind of dampened, though, when she tells him about her dead husband: “He was thirsty,” she says. “He died of thirst. His company sent him to a hospital. I was supposed to be part of the cure somehow, and all I did was observe. I thought he was really getting better and a doctor told me he would be dead in a year. They all would be. I’m going to close my eyes now.” Man, that was even more chilling than the coyotes. Throw in Don asking if he “broke the vessel” and the nightmarish feel is complete.

Close to landing, Don seems as though he’ll accept her offer of a ride, but he demurs. He tells her that his wife knows he’s a terrible husband, and follows that with “I really thought I could do it this time.” In the context of Don’s karmic wheel—betrayals of all kinds, over and over – this basically refers to everything, I suppose. Did he think he could start over, now, and stop wounding everyone that loves him? He pulls up the window shade and lets the harsh, bright light in, dispelling the darkness. But the dark will come again, soon enough.

we heartsters – Who else wanted to snap Ken’s eye patch and tell him to knock it off? Were you also kind of dying to see what Bob Benson’s up to? And represent your hood – East or West coast?