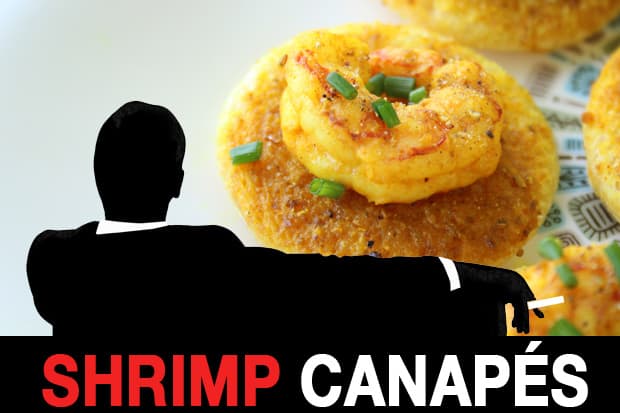 Party Like a Mad Men with this Retro Happy Hour Menu

I’ll admit, I’ve been avoiding writing this for a while now. I’ve been in denial about the end of Mad Men. It’s always hard to say goodbye to a beloved tv show, but Mad Men? The best show ever? How can it possibly just be over? To celebrate the return of the final episodes, we here at we heart this decided to #PartyLikeAMadMan and have a little retro cocktail hour. We served some Shrimp Curry Butter Canapés straight out of The Unofficial Mad Men Cookbook

with some classic Whiskey Sours to wash them down. Shaken in the perfect retro shaker, natch. Canapés sound so fancy, but really they are just tiny toasts topped with something.
Modern canapés are often overwrought amuse-bouches covered with mousse and emulsions, but back in the 1960s they were more utilitarian affairs. These little bits of finger food were there to help soak up the booze.

And as party food, they were supposed to be easy to eat while mixing and mingling. These shrimp curry butter canapés added a little flair with the spices and chives, although we will warn you that the yellow of the curry does tend to linger, so keep an eye out for your party dress! 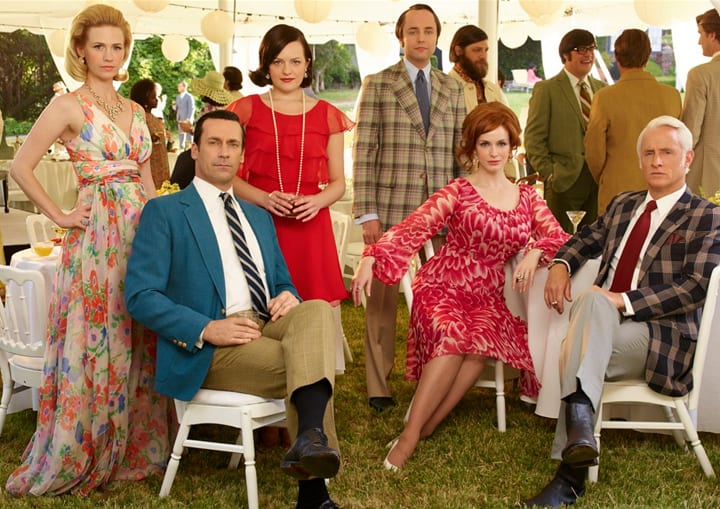 Watching the world of Sterling Cooper turn into Sterling Cooper Draper Pryce and then…wherever it’s going now has been quite the journey. Don of course is the ultimate anti-hero. From the very beginning he did such despicable things that you knew logically you should despise him, but he was just so magnetic.

Every so often we would get a glimmer of a good human being in there, but then he would inevitably slide back into his old ways. As the seasons progressed Don showed bits of growth and real attempts to change, but always at the root he remained his flawed self. I can’t wait to see where he ends up at the conclusion. 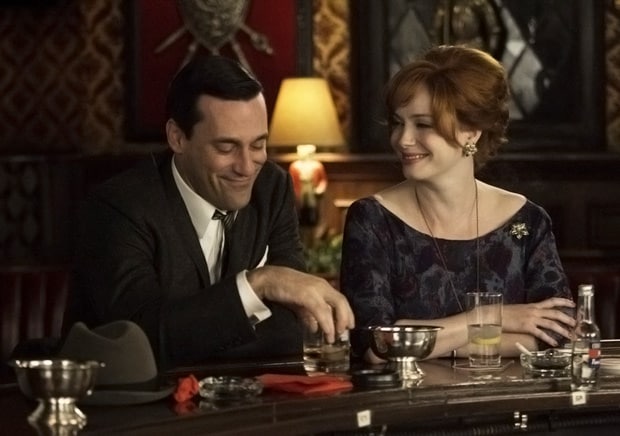 One of our favorite scenes

And then there’s Joan. The office matriarch was pretty frosty in the early years, but she was tough because she had to be. Joan went through more than I would wish upon my worst enemies on her path to achieving her goals, but come hell or high water she was going to get there.

Not only did she fight long and hard for her position of power and respect, but she made peace with what she had to do to get there. Every tiny moment of camaraderie between her and Peggy feels so gratifying knowing how far they’ve come. Was there a dry eye in the house when this aired?

Peggy’s journey has been my favorite to watch. You couldn’t help but cheer her on from her very first day in the secretarial pool when she was just so…earnest. She struggled to get ahead in an unconventional way in a world not welcoming to her.

And my how far she’s come! You would think that her story would have been the most obvious to us, knowing the trajectory of the (continued!) struggle of the American woman in the workplace from the benefit of time. Peggy’s story has been anything but obvious though, alternating between victories and frustrations, making her feel real, and oh so satisfying to watch.

And to break up all this mushiness

So raise a glass to Don, Joan, Peggy and the gang, and let’s toast to a time that was at once much simpler and much more complicated… ‘s adaptation of the Playboy Gourmet By Thomas Mario (Crown, 1961) 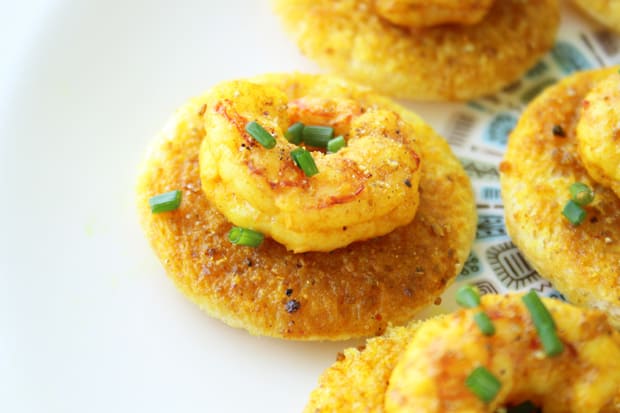 1. Boil 2 cups water. Add shrimp, salt, and lemon juice. Cook covered for 3 to 5 minutes, until shrimp are pink and cooked through. Drain and chill. Making melba toast is easy, all you need is a small juice glass and a whiskey sour in the wings!

3. Make the melba toast by using a small juice glass to punch out circles of white bread, then toast until nice and brown. (We used Julia Childs’ recipe.) 4. Top each toast with a shrimp and use a basting brush to generously brush each canapé with the butter mixture. Top with a sprinkle of salt, white pepper, and chopped chives. 1. Squeeze fresh lemon(s) for the juice.

2. Combine whiskey, lemon juice, and sugar to ice in a cocktail shaker and shake well. 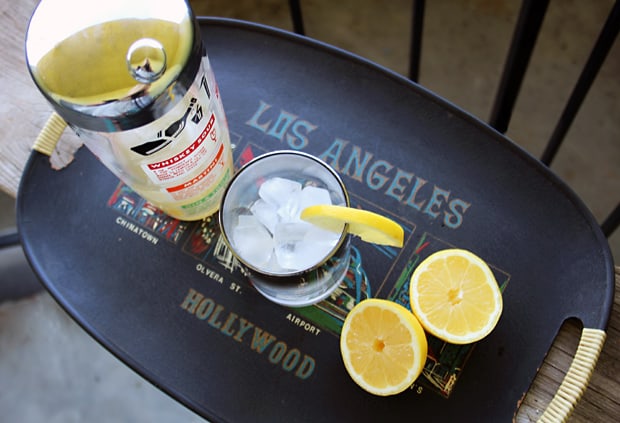 3. Strain into a glass filled with ice. Garnish with lemon wheel.

Note: For a more tart drink, reduce the amount of sugar.

we heartsters – Join us and the The Unofficial Mad Men Cookbook site and Party Like A Mad Man on Sunday, April 5, during the Mad Men final season premiere. Follow the hashtag #PartyLikeAMadMan to find pics, tips, tricks and recipes for hosting your own Mad Men celebration.

photos: we heart this

Heather is a midwesterner living in Los Angeles and enjoys concocting weird flavor combinations and exploring delicious ethnic foods. She blogs at foodforfunandpleasure and knows her way around the spice cabinet like nobody’s business.

heather
Heather is a midwesterner living in Los Angeles and enjoys concocting weird flavor combinations and exploring delicious ethnic foods. She also knows her way around the spice cabinet like nobody's business.
Latest posts by heather (see all)

What Is A Trim Haircut + 5 Benefits Of Hair Trimming