There is just something about October—and Halloween—that appeases one’s inner goth. Forget pumpkin spice lattes and cozy scarves; my goal is to be scared out of my ever-loving mind. Of course, as a very generous person, I want y’all to be scared too, so I’m sharing the creepiness. In the past, we’ve looked at murderous madams; this year, we’re going for three unsettling, spine chilling mysteries, the kind that NEVER GET SOLVED. So lock your doors, hunker down, and join me down a dark and terrifying rabbit hole.

Who Put Bella in the Wych Elm?
Picture the scene: April 1943, in the Hagley Woods of Stourbridge, UK. Four schoolboys are hunting for bird’s nests; one climbs an elm tree, peers inside the hollow trunk, and finds…a human skull staring back at him. When the authorities are alerted, they find an entire decomposing woman shoved into the trunk. The victim is still wearing her shoe, and a wedding ring on her left hand. Her right hand is missing; turns out, it had been sawed off and the bones were found buried around the tree’s base.

Forensic investigation revealed the woman was around 35 years old and had been dead for approximately 18 months; because her body was found with taffeta stuffed in her mouth, it was concluded that she had been asphyxiated and put in the tree shortly afterwards (super horrible alert: in order to be placed inside the tree, her body had to be warm and flexible, before rigor mortis took place). Naturally, the entire community was desperate to find her identity: was it a sign of ritualistic witchcraft, as anthropologist Professor Margaret Murray alleged? Could she have been a Nazi spy, on a secret mission that went terribly awry? A sex worker who came to a bad end?

The answer has never been revealed, as dental records and missing person records never provided an identity match. The horror icing on the creepy cake, though, is the graffiti that began appearing nearby that year: “Who put Bella in the wych elm?” Variations of this phrase appeared repeatedly; as recently as 1999, the message was spray painted onto an obelisk in Hagley. Still no definitive word on who “Bella” was or what someone may have known about her identity and death.

I apologize for your now inevitable aversion to any and all elm trees. Hinterkaifeck
This story plays upon all of my fears. Isolated farmhouse, check. Weird noises in the attic, check. Brutal murder of an entire family, check check check. The Hinterkaifeck farm, located in a Bavarian village in Germany, was the site of a truly strange and horrifying murder in March, 1922. The entire family—Andreas and Cazilia Gruber, their adult daughter Vicktoria, Vicktoria’s young children Josef and Cazilia, and a maid, Maria Baumgartner—were found dead in the barn, dispatched via pickaxe. The murder scene was horrid—reportedly, little Cazilia had torn out clumps of her own hair, as though she witnessed the terrible crime.

What makes this case even more unsettling, however, is what precedes it. Six months earlier, the Gruber’s maid had given notice, explaining that she often heard strange noises and had come to believe the farmstead was haunted. In mid-March of 1922, Gruber himself noticed strange happenings; an unfamiliar newspaper showed up on the front porch, he heard footsteps in the attic, and most terrifying of all, he found a set of mystery footprints in the deep snow. The prints originated from the forest around the farm and went directly to the house itself, with no footprints back out to the forest. Gruber talked to some locals about these odd phenomena, but was unable to make any headway.

Adding to the bizarre circumstances, the Gruber’s bodies were not found for four days. It was only due to the children’s absence from school that a search party formed. During those four days, the murderer apparently STAYED IN THE GRUBER HOUSEHOLD, eating their food, using the chimney and feeding the livestock. Money and valuables were left in the home, so it’s clear the killer was not looking for material gain.

But wait, there’s more (not that this case needs any more horrors.) There was rumored incest within the Gruber family; in fact, it was alleged that Viktoria’s son Josef, said to be fathered by her former paramour Lorenz Schlittenbauer, was in fact sired by Victoria’s own father, Andreas Gruber. Accordingly, Schlittenbauer was questioned as a suspect, but no evidence ever turned up. He doesn’t make much sense as a suspect, anyway—if revenge was his motive, why wouldn’t he simply kill Andreas, as the perpetrator of sexual abuse towards Viktoria?

The case went cold at that point, and has never been solved. The farm was later razed, with only a memorial marking its place. 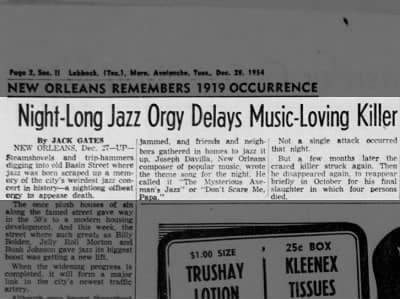 The Axeman of New Orleans
If you happened to catch American Horror Story: Coven, you no doubt saw the fictionalized version of this killer, in all his jazz-loving glory. But the Axeman was no fabrication; he was a mysterious killer who took his love for jazz music to murderous lengths and terrified an entire city. It’s such a strange story, a bit of a more modern parallel to Jack the Ripper, and once you start digging into it, the case is hard to forget.

In May of 1918, in New Orleans, the murders began: Italian grocer Joseph Maggio and his wife were axed to death in their bed. A month later, another grocer and his common-law wife were found in a pool of blood, still alive but badly wounded. The weapon? An axe, of course. In August 1918, a woman awoke to see a tall figure standing over her bed, holding…an axe, obviously. She survived the attack and the man fled. Several nights later, another Italian grocer was murdered.

At this point, the entire city was very nervous. The actual attacks ceased for a bit, although there were various attempted break-ins to residences, often with an axe left behind. In March of 1919, the Axeman struck again, attacking yet another grocer. His wife, carrying their two year old child, tried to intervene—the Axeman killed the child and fractured the wife’s skull. That same month, the New Orleans Times-Picayune paper received a letter, purportedly from the Axeman itself. The salutation was “Dear Mortals,” and the first paragraph read “They have never caught me and they never will. They have never seen me, for I am invisible, even as the ether that surrounds your earth. I am not a human being, but a spirit and a demon from the hottest hell. I am what you Orleanians and your foolish police call the Axeman.” (You can read the letter in its entirety here).

Within the body of the letter, the Axeman strikes a deal with the New Orleans populace: “Undoubtedly, you Orleanians think of me as a most horrible murderer, which I am, but I could be much worse if I wanted to. If I wished, I could pay a visit to your city every night. At will I could slay thousands of your best citizens, for I am in close relationship with the Angel of Death. Now, to be exact, at 12:15 (earthly time) on next Tuesday night, I am going to pass over New Orleans. In my infinite mercy, I am going to make a little proposition to you people. Here it is: I am very fond of jazz music, and I swear by all the devils in the nether regions that every person shall be spared in whose home a jazz band is in full swing at the time I have just mentioned. If everyone has a jazz band going, well, then, so much the better for you people. One thing is certain and that is that some of your people who do not jazz it on Tuesday night (if there be any) will get the axe.” True to his word, the city was did not suffer any axe attacks that night.

There continued to be attempted murders and axe attacks sporadically for months; in October of 1919, the last grocer was murdered in his bed. This was the last attack associated with the Axeman, and his identity is unknown to this day. Speculation abounds; there was a definite pattern of racism (majority of victims were primarily Italian), but was this really the work of one jazz loving devil, or rather a concerted band of murderous bigots? Either way, I’d advise you to keep some jazz tracks at hand—just in case.

we heartsters, do you have a case/story that has always haunted you?

Supplies For Acrylic Nails: Everything You Need