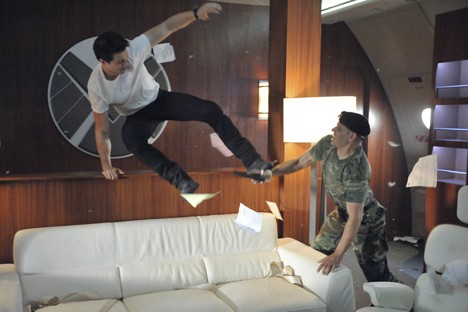 So remember last week’s recap, when I said I wasn’t dazzled by the Agents of SHIELD pilot? You guys, it’s now the second episode, and I am still feeling really un-dazzled. I know, I know, it’s still early days, but so far I’m just not feeling the magic. Part of the problem, I think, is that we just aren’t getting much character development – really, there wasn’t even time for that this eppy, what with shiz blowing up and murderous rebels and the heavy-handed narrative emphasis on TEAMWORK.

Subsequently, even when characters that I like (*cough Coulson cough*) are in mortal danger, I feel very meh about it. I’m sure (hoping) that we will get to know the characters as the series progresses – obviously we’re only two shows in – but an episodic action series with over the top plot lines has to have a little heart and substance to make it all hang together, and I haven’t seen that yet. Also, I am seriously still gutted over the Breaking Bad finale and am probably a bit bitter towards all non-BB shows at the moment.

Ok, Debbie Downer out. On the plus side, there was a super-fun cameo at the very end of the show, and a note of mild double-crossing intrigue, and Lola the cherry-red car survived unscathed. So let’s see what happened:

Um, there wasn’t one this week, which totally messes up my episode subheadings. There was a super dangerous object, however – the 084. That’s Agents of SHIELD code for a foreign object, and the last one Coulson dealt with was a hammer (Thor, holla), so this is serious business. This particular 084 turns out to be an ancient alien power source; the cherry on top is that it’s drenched in gamma radiation. Like the kind that created Captain America? I think? If that wasn’t enough, the SHIELD gang aren’t the only ones that want to get their hands on it – a mixed group of Peruvian rebels and military personnel are all up on the 084 too.

As we begin, the gang’s plane is blowing up, like people are getting sucked out of a giant hole in the side serious. We flashback to nineteen house earlier: the agents are en route to Peru, to track down the aforementioned 084, and Skye is wandering around in a bit of a daze. It’s not every day a girl goes from a van to a massive and uber luxurious…what would you even call it? Somehow “plane” just doesn’t do it justice.

While she’s trying to get acclimated, Coulson tells Grant that Skye is being folded into the Agents of SHIELD team as a consultant, but Grant is not trying to hear that. (Side note: Grant is still roughly as emotive as a brick wall, or maybe an ice cream wrapper.) Fitz (the dude half of Fitz-Simmons) is pretty psyched to have Skye aboard, though. Coulson and Skye also have a brief exchange about his near-death or resurrection or whatever it was; Tahiti is brought up, naturally, and Coulson says “It’s a magical place” for like the tenth time already.

After landing in Peru, Coulson, Skye and Fitz-Simmons go to check out the 084 – it’s lodged in the wall of an ancient Incan temple and the professor that found it has never seen anything like it. Continuing to develop the thread of Skye as super-socially-conscious-girl, Coulson cautions her to keep the situation quiet, even as Skye wants to tweet the potential danger to the Peruvian locals. Once inside, Skye finds herself at a loss – she keeps trying to help but is sort of in the way, seeing as she is still lacking a specific role on Team SHIELD.

Meanwhile, Grant and May are ambushed by the local military, ending up in a stand-off. Coulson attempts to gain control when surprise! – he totally knows the leader of the army, Camilla Reyes. I mean, it seems like he really knows her, guys. The stand-off ends amicably, the two banter, Reyes makes it clear that she is interested in the object, and then all hell breaks loose in the form of a shoot-em-up gang of rebels.

Thus begins a balletic shooting dance performed by Coulson and Reyes, even as Grant ends up yanking the 084 from the wall of the temple. Next, Grant disperses the area by wielding this – I dunno, power stick? – and slamming it down into the ground, which force fields the area. (Forgive my ignorance – there were a bunch of terms that made me cock my head like a puzzled dog this episode, so if the stick is a known thing with a name, fill me in via the comments.)

The gang, including Reyes and her men, make it back to the “bus” and board. The 084 is determined to be, as previously mentioned, really freaking scary and unstable and basically a weapon of mass destruction times a zillion. Coulson flirts with Reyes in between trying to smooth things over with May, who has been pretty direct about her NO COMBAT rule. She needs to stop being so good at combat, then, right?

When Coulson goes to check on the rest of the team, he finds them at each other’s throats. Everyone seems to be doubting everyone else. Coulson’s advice? Between Grant, Fitz, and Simmons, they cumulatively have mad foreign language skills, two PhD’s, and rocket science acumen, so they should be able to figure this one out. Skye is conspicuously absent from Coulson’s comment. Later, Skye attempts to bond with Grant (gee, is push-pull romance germinating as we speak?) and explains that she identifies with the Rising Tide movement (the sort of counter-force from the last week) because they just want to get crucial information out to the people and empower them. Grant is kind of like, “ooookay then, Skye” but he’s pretty nice about it, for Grant. Skye also notices he was grazed by a bullet during the scuffle, but he’s all “pffffttttt it’s fine.”

In Coulson’s quarters, Reyes is making her move—distraction by faux seduction. What she really wants is the scary device, which apparently could quell the potential uprising in Peru that was hinted at earlier in the episode. Coulson figures out her plan; Ward, via observing the shadiness of Reyes’ soldiers, figures it out too, but is ultimately bested. The soldiers gas out May, problematic because she’s flying the plane, and then they capture the rest of the team. Cut to the agents, tied up and stuck in a holding area, including a still passed out May – Grant informs them that she’s known as “the Calvary” which greatly piques their interest. Then, right on cue, May comes to and starts dispatching the bad dudes. That gnarly cracking sound you heard? No biggie, just May dislocating her wrist to free her bonds.

The team sketches out a desperate plan; they use the 084 to blow a hole in the plane, which effectively sucks out a pack of baddies and puts a severe crimp in Reyes’ plans. So severe, in fact, that it leaves Coulson, Reyes and Grant thisclose to skydiving with no parachutes. So everyone is blowing around, things are dire, and then Skye thinks fast and releases an inflatable raft against the wall, plugging the hole that Grant was bound for and saving everyone.

Yay obvious teamwork…Coulson is vindicated that the agents have proved they can come together and save the day. Sure, the luxury “bus” is a hot, half-destroyed mess, but that’s a small thing compared to THEIR LIVES. Even Grant seems to have new respect for Skye. And they safely retrieve the 084 and get to watch it be rocketed off into the stratosphere, where it can’t hurt anyone. As they are celebrating with beer and everyone is all like, gee this nice, Skye gets all double-cross-ish. A text from the Rising Tide flashes on her phone and inquires as to her status. Her response? “I’m in.” Hmmm…

Last but certainly not least was the hyped cameo by Nick Fury, the Agents of SHIELD director. Yep, that was Samuel L. Jackson, guys, and I wish he’d be around every week to yell and be generally awesome. Barring that, I’m crossing my fingers for a shiny new episode next week that I will be less bitter about.

we heartsters: Ok, someone please explain what the hell a Chitauri is – this is what “killed” Coulson? Is Skye really gonna play the Agents of SHIELD like that? And are you guys finding your way into the show yet?