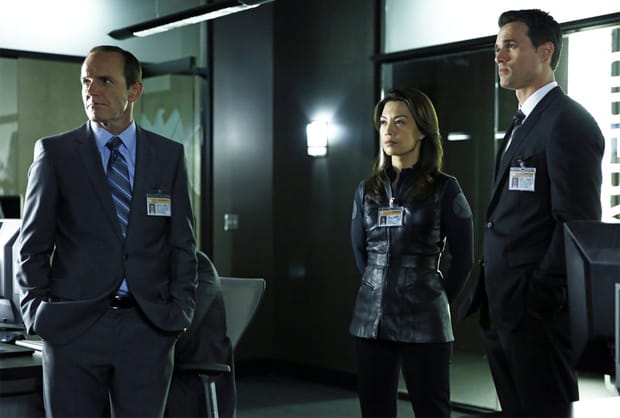 The hub of this week’s title is the bustling center of SHIELD; it’s nice to get out of that darn plane every once in a while, isn’t it? Accordingly, we saw Fitz put on his big-boy/action hero pants, Skye got on her hacker high horse, and Coulson found out that Tahiti is kind of like Vegas – as in what happens there, stays there.

Refreshingly, most of the characters this weeks showed a bit of growth and change. Fitz and Simmons are developing as characters with distinct personalities (I mean, look, I’m no longer referring to them as Fitz-Simmons) and both of them traveled outside of their comfort zones. Ward was able to dial down his “I’m the alpha dog AT ALL TIMES” shtick, and May showed she’s willing to break the rules to save her coworkers. The one person who still seems to be floundering? Skye, who spent most of this episode wandering around and incessantly complaining about security levels. Um, yes, Skye, this is a shadowy, super-secret fringe agency, so security levels are a thing.

Because I’m feeling generous, although the actual object this mission was a weapon guarded by a separatist group seeking independence from Russia and Georgia, I’m going to give this one to Fitz. He both mourned the loss of a perfect sandwich (it’s the hint of pesto aioli that makes it magical, guys) and kind of saved the world, so he deserves the superhero star of the week slot.

When the gang receives orders from one of SHIELD’s big bosses, Victoria Hand, they report to the hub and learn about the weapon; set to go off in two hours, it’ll apparently spark a WW3 type situation.

Side note: what was with Hand’s red streaks? I love bright hair, but it totally looked like those cheapie clip in pieces – the wardrobe/beauty budget must be tight or something.

At any rate, Ward and Fitz are selected to cross the border, infiltrate the holding place, and dismantle the weapon.
They have a couple of close calls, including one where Fitz literally saves them via shorting out the electrical system at a Russian bar. There’s a GAME ON, people – after Fitz “fixes” the short and gets the game back on, the killer Russians are all “here, little bear, have some vodka, we love you.”

Then there is a lot of running and hiding, the tragic end of that aforementioned perfect sandwich, some weird camouflaged fake-road/sleeping bag device and the eventual infiltration and dismantling of the weapon. The only hitch in all this Fitz-Ward bonding? Um, no one’s coming to get them out of there, after the mission.

Meanwhile, Skye is continuing to push Coulson and grill him on the whole security clearance thing. Her security level is, like, a negative 6000 at this point. Regardless, she is desperate to: a) hack into the main system and find the redacted document about her parents and b) figure out where the hell Fitz and Ward are, and if they’re OK. She even ropes the normally straight-arrow Simmons into her hacking mission.

Simmons is a super awkward pseudo-criminal; when she’s caught accessing files, she’s attempt to clumsily flirt her way out of it and seals the deal by shocking her superior unconscious. Girlfriend is smooth, obviously.

When Skye hacks into the system, she can’t resist locating the redacted file, but she doesn’t have time to open it, so she checks on Fitz and Ward and learns there is no planned extraction for them. Coulson catches her in the act, but Skye isn’t sorry; she’s outraged that SHIELD would abandon their own agents like that. In turn, Coulson confronts Hand, but she’s basically like, yeah, it’s a mission, trust the system.

But when May, Simmons, and Skye decide they’ll form their own extraction party, Coulson is all in – remember, he’s different now. He cares, you guys. May expertly pilots the plane to the rescue, blowing over a zillion dudes with turbine power. Easy peasy lemon squeezy.

Simmons and Fitz reunite, Ward gives Fitz props, and Coulson throws Skye a bone: he’s found out that the person who dropped her off at an orphanage was…a SHIELD agent. He tells her that’s all he knows but will keep digging for her. However, when Coulson is alone with May, we see that he knows more than he’s telling Skye; he seems to be protecting her from some very dark info.

Coulson also asks May to help him find out more about his own death and resurrection – clearly, the memory screen (or whatever it is) of Tahiti is faltering and Coulson needs the truth. When he requests his own file, though, he’s told that he doesn’t have the Security Level to access it…curiouser and curiouser.

we heartsters: “Little bear” is a totally great term of endearment, right? Would you want Ward or Fitz as your partner on a mission? And confirm or deny my clip-in hair piece theory, please.