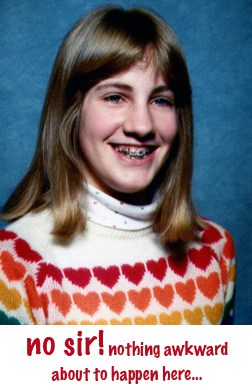 Sure, I’ve heard more terrible first period stories (during a book report, wearing white pants, in gym class) but I would bet that few are as cringe worthy and funny as mine…

Like many people I know, my parents were divorced when I was young. I went to see my father every weekend throughout my childhood, and this weekend, when Mother Nature decided it was my time, was no different.

It was an ordinary Sunday with Dad. He was watching football, I was trying to keep myself entertained (usually that meant snooping around his house). When during a bathroom break from my detective work, it happened. Now, I had been given “the talk”. My Mom handed me a pamphlet one day that explained a woman’s menstrual cycle (I think it was put out by Kotex). She sat and smoked while I read it, then asked “Any questions?” to which I quickly shook my head no. Then she went to make spaghetti and I went to watch TV. I was well prepared!

What I wasn’t prepared for was that it was going to happen while I was at my Dad’s house. And not only that, my Step Mom wasn’t even home. Instead, I had to muster up the courage to go tell my Dad. Cause honestly, even though I knew I wasn’t dying, I didn’t really know what to do!

I shuffled downstairs and sat down next to him as he watched the game. When I finally got some nerve gathered I said “Dad?” He asked “Yeah?” I blurted out with all my strength “I got my period.” He looked a bit flustered for a split second, but quickly said “Uh….Karen has stuff for that under the sink”.

I guess I wasn’t as good of a snoop as I thought because I should have known this! I quickly ran upstairs and began searching for the things that I had not only seen in the pamphlet, but seen in my Mom’s closet too. And I came up with…nothing. Oh boy, this was bad…

I slunk back downstairs and sat down next to my Dad and found a bit more courage somewhere to say “Um, Dad? There’s nothing under the sink.” He said “She’ll be home soon. Didn’t you bring anything from home?” he scolded me. “No” I said shamefully.

The game continued on for a few minutes, the whole time I was sure I ruining his couch. When I finally couldn’t take it anymore I said “Dad?” He looked at me, visibly annoyed that I kept interrupting him during the game, “I never got it before” I squeaked out.

He popped up and started to pace around, looking like a cross between one of the three stooges and a crazy person. “Oh…uh…ok…well, let’s see. Hmmm, first time, eh? Hmmm…ok!” After a minute or two of this, he went and called my Step Mom. From the next room I heard the rumblings of the phone call.

Turns out, Karen wasn’t on her way home. She was going to be hours. Their solution? Walk to the YMCA, 6 blocks away and send me into the Woman’s room with a dime. I honestly can’t remember if they had 2 cars. I want to believe they didn’t. Because if this was just the quickest solution, then that’s just wrong!

But, that’s precisely what we did. When we got there, my Dad gave me a coin and said “They’ll be a box on the wall that will give you what you need”, as he ran off. Like I didn’t feel ashamed enough! The whole thing felt like some sort of underground drug deal.

But there it indeed was, the box on the wall that was going to solve it all. I waited for the woman who was in there to leave, and popped my dime in. Out falls a GIANT box. I mean, a box practically as big as my whole little eleven year-old head. I scurried into the bathroom. And here’s where it gets truly nuts…

In the box was something similar to what I saw illustrated in the pamphlet, similar to what I saw in my Mom’s bathroom closet. But not quite right. Where was the sticker on the bottom? Instead were two long strips extending from each end. Maybe this one was made wrong? I threw it away and went out to comb the Y looking for my Dad “All set?” he asked as he headed towards the door. “No!” I whispered, “I need another dime, that one didn’t work!”

One dime later, the same thing. A ginormous, sticker-less thing that would not stay put in my panties no matter how I tried. I was sure it was going to fall out of my pant leg as I walked out the front door, surely right in front of the boys swim team. Of course I learned later that it was a napkin that was supposed to be attached to a belt. Why? Because I was BUYING PADS AT THE YMCA! This box probably hadn’t been filled since my Mom got her first period.

I realized things were grim and knew I had to act quickly, as I was already in there for about 15 minutes and was worried my Dad was going to send someone in after me and at that point, I should just drown myself in the toilet. This could not get any more embarrassing. You remember what it was like to be eleven? I was embarrassed of everything. This was way too much. So, I took off my underwear and tied the ends of the pad around the crotch, knoted them, then waddled out to meet Pop.

To say it was an uncomfortable walk home would be putting it mildly. Partly because I had a thigh-sized pad in my panties, partly because I was sure the knots were going to come undone as I walked and partly because I just became a woman while in my Father’s care. The horror…

stef
Stef is a plethora of things. Amongst them: co-founder of we heart this, photographer, condiment connoisseur, Philly girl in the California desert, borderline hoarder and a hardcore beauty junkie. She also has a touch of wanderlust and, arguably, the cutest dog in the whole world...
skin tone: NC 25/30
skin type: oily with a fear of rosacea
favorite beauty product: high end skincare and lip products