What’s leaving and coming to Netflix in May 2016, and the products you need for condolence or celebration

Netflix giveth, and Netflix taketh away; a plethora of new shows and movies are added each month to Netflix, but this also means that current content is removed. Join us here each month, as we cherry pick what to look forward to—and what to binge before it disappears forever! And because “Netflix and beautify” should be a thing, we’ll highlight an apropos beauty product to enhance your chill time.

May 13th: Is the Man Who is Tall Happy? (2013) Fans of French director Michel Gondry (Eternal Sunshine of the Spotless Mind) should see this inventive documentary; Gondry weaves in animations to illustrate conversations with Noam Chomsky, the activist/linguist/historian. It’s one of those films that increases your brain size, even as it delights the senses.

May 16th: Blade Runner: Theatrical Cut (1982) How could you not love a vision of LA as a smoggy dystopian hell set in 2019? Based on a Philip K. Dick novel, this violent and vivid film is up there in the pantheon of excellent science fiction. Harrison Ford stars as the titular blade runner, and Sean Young smolders.

May 22nd: Ida (2013) The New Yorker deemed this Polish film Ida a “masterpiece,” and I’m inclined to agree. It’s the story of Ida, brought up in a Catholic orphanage while the Nazi occupation of Poland rages around her. What she learns, right before she officially joins the order, turns her world upside down. It’s a grave, somber and hauntingly beautiful film, shot in austere black and white, and it will stay with you.

May 31st: Clerks (1994) This is old school Kevin Smith: the film that launched his career. It’s a meandering slice of life that examines sex, friendship, motivation—the very stuff of our time here on earth, in all its absurdity. Title character Dante, a clerk in a convenience store, enacts the modern version of the nine circles of hell, a la Dante Alighieri’s Divine Comedy.

What’s coming to Netflix in May (For full list of arrivals, check here)

May 1st: She’s Beautiful When She’s Angry (2014) A truly inclusive look at the roots and future of feminism, this documentary examines the foundation laid by our foremothers. It’s like a ride through feminist history, bringing us right up to the SlutWalks of modernity. Favorite fact: in the late 60s’, there was a collective that dubbed themselves the Women’s International Terrorist Conspiracy from Hell, or W.I.T.C.H. for short.

May 1st: Sixteen Candles (1984) If you haven’t seen this and bathed in the glory that is Jake Ryan, I feel a little sorry for you. Starring Molly Ringwald in all her fresh-faced, ginge-haired glory, it’s the story of teenager Sam, her embarrassing family and the aforementioned Jake Ryan. One caveat, and it’s a big one: director John Hughes made some classic films, but he also contributed to some major stereotyping, as in the cringe worthy foreign exchange student character Long Duk Dong.

May 20th: Lady Dynamite, Season 1 Comic Maria Bamford in a series modeled after her own life experiences? I expect this to be offbeat, wise, and of course hilarious; definitely going in my queue.

May 27th: Bloodline, Season 2 If you missed the first season of this Netflix original series, go binge it immediately, and then meet me back here for Season 2. It’s a Florida-based murder mystery, of sorts, pulling in the darkest of family secrets and the strongest of family bonds. The cast is phenomenal: think Sissy Spacek, Kyle Chandler and Linda Cardellini of Freaks and Geeks, and Mad Men. I watched the hell out of the first season, and plan to do the same for the second. 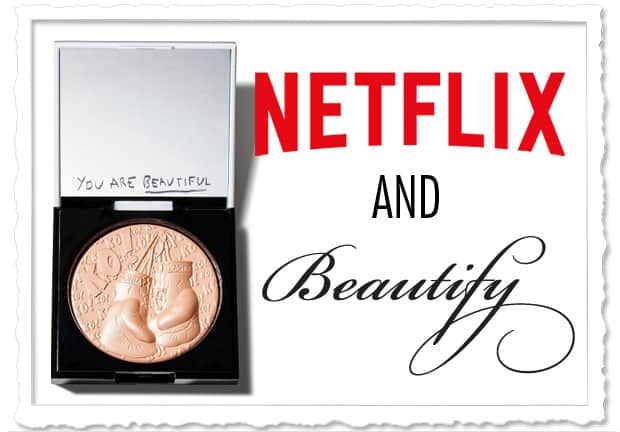 Netflix and beautify pick: It’s all about the highlighter this month. Mimic the youthful glow of Molly Ringwald, or celebrate your right to be a very dewy W.I.T.C.H. Hell, maybe enough highlighter could block dystopic pollution? For all of these scenarios, Sonia Kashuk’s Knock Out Beauty Skin Glow in Golden Gloves has you covered. This gel powder is SO pretty—the boxing glove detail is so intricate that I didn’t want to touch it at first. I got over it, obviously, and was rewarded by a buildable wash of rose gold. You could kill in this highlight (cough, cough, Bloodline) and still look like a glowing angel (I mean, skip the killing part, but you get it).

we heartsters: What’s on your to-watch list for May? Equally as important, tell me about your favorite highlighter.