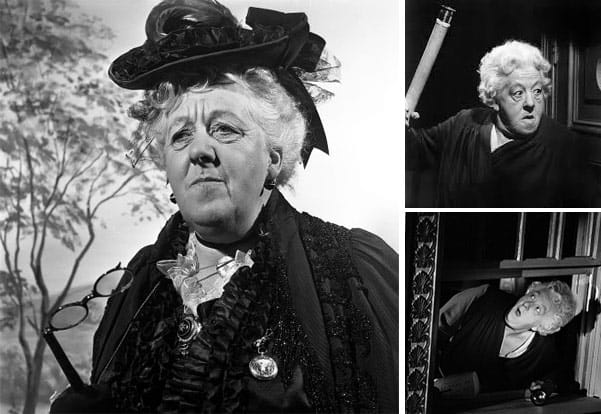 Over the years (and just this week!), I’ve shared with you my favorite scary movies but lately I’ve really been getting into suspenseful, murder mystery movies. So I’ve decided to share a few of my favorites with you! We just don’t make them like we used to, folks. Names like Nick and Nora Charles, Hercule Poirot and Miss Jane Marple evoke the sense that a grand mystery is about to unfold!

(1934)
It’s no wonder why they made numerous sequels to this hit based on the work of Dashiell Hammett, starring William Powell and Myrna Loy as Nick and Nora Charles, married millionaires with a fondness for drinking and detective work–probably in that order, too! When the daughter of one of Nick’s acquaintances (played by Maureen O’Sullivan, mother of Mia Farrow) asks Nick for help in finding her missing father, hijinks ensue! I think my favorite scene is when Nick punches out Nora so she’s not in the line of fire of a bullet. You’ve got to love old-timey spousal abuse.

(1945)
Ten strangers are invited to spend the weekend on a secluded island at the behest of an unknown host who knows their darkest secrets. One by one, they’re picked off like in that 10 Little Indians song. Who’s doing it? Who will survive? Watch the movie and find out!

(1961)
Margaret Rutherford nails it as Agatha Christie’s Miss Marple, elderly spinster detective extraordinaire (as seen in the intro photo). Whilst traveling by train, she witnesses a woman being strangled on a passing train. The police shrug off her report as the antics of a spinster, so she goes undercover as a maid at a nearby mansion to solve the crime. Rutherford’s Marple is chock full of wit and dry humor and she is just a complete delight to watch. I love the interactions between her and the character of Mr. Aganthorpe, her aggressively angry invalid employer, especially when he proposes to her at the end of the movie.
Fun Fact: Margaret Rutherford was married to Stringer Davis, the actor playing Miss Marple’s friend, Mr. Stringer. Stringer’s character does not appear in the original story and was added as a favor to Rutherford.

4. Murder On The Orient Express

(1974)
Trapped by snow, Agatha Christie’s Belgian detective, Hercule Poirot (Albert Finney), is stuck on a train with an all-star cast of characters and must determine who murdered a fellow passenger who’d tried to hire him for protection. The movie is a veritable shell game, utilizing misdirection and plot twists, culminating in an impressive 27 minute monologue by Finney’s Poirot as he exposes the killer. I think my favorite things about this movie is Poirot’s moustache cozy and moisturizer gloves that he sleeps in. Fun Fact: Ingrid Bergman won an Oscar for her portrayal as a former Swedish nanny with a terrible secret.
Fun Fact: This story was inspired by the Lindbergh baby kidnapping and murder.

(1976)
Spoofing classic detective novels, Murder by Death is filled with campy goodness and Alec Guinness (Obi-wan Kenobi) as a blind butler. Five characters, based on famous literary detectives, are invited along with their sidekicks to a creepy mansion by an eccentric millionaire (played by Truman Capote…who I’m pretty sure is just playing himself…). Tasked by their host with solving a murder, they must work together to save their reputations as world-class detectives and possibly their own lives. Maggie Smith as Dora Charleston (Nora Charles) is pretty much completing me in this movie.
Fun fact: When the guests arrive, the doorbell makes the sound of a screaming woman. The scream belongs to Fay Wray from Hong Kong.

6. Death on the Nile

(1978)
Poirot (this time played by Peter Ustinov) is at it again, this time whilst floating down the Nile. When a newlywed heiress is murdered on her honeymoon and most of the other passengers have a motive, Poirot must discover who did it before they reach their final port.
Fun Fact: Jane Birkin, for whom the Hermés Birkin bag is named, plays the French maid, Louise.

(1980)
Miss Marple is back, this time played by Angela Lansbury (who also featured in the previous title on this list). I loves me some Angela Lansbury, but Margaret Rutherford just owns Miss Marple, but this is still a respectable turn. When a local woman is poisoned and it looks like the intended victim is a glamorous movie star (played by Liz Taylor), will Marple be able to figure out who is handy with poison before another person is killed? While not a traditional scary movie with monsters, Kim Novak’s Lola Brewster is just creepy as hell. Like on the level of Pennywise the Clown from It. I had nightmares. And spoiler alert, she’s not even the killer!!!! Enjoy this burnfest between her and Liz Taylor’s Marina Rudd.
Fun Fact: This story was inspired by real events involving film star Gene Tierney. A measles-infected fan kissed the pregnant star after a performance and infected her, resulting in her first child being born with profound disabilities.

(1985)
Based on the board game of the same name, a bunch of strangers are gathered for a dinner party by an anonymous host they’ve never met. Each character is given a color-based pseudonym and we soon discover the one thing they have in common is that they are all being blackmailed. Ultimately, we need to figure out who killed Mr. Boddy, in the hallway, with the candlestick, along with his accomplices. Clue is one of my favorite movies of all time. I have probably watched it a bazillion times (conservative estimate) and I have yet to get tired of it. It’s one of those movies where you notice new things each time you watch it and almost every line is highly quotable. Fun Fact: Jane Wiedlin of The Go-Go’s plays the Singing Telegram Girl at the 1:22 mark.

So there you have it, my recommendations for must-see mysteries that are guaranteed to please. Did any of your favorites make the cut? Let’s hear about it in the comments below!