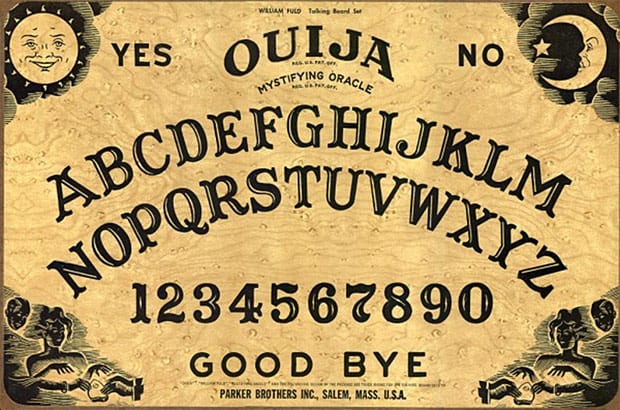 It’s Halloween and that means one thing: time for another Scary Movies series!

If you were ever a teenage girl and attended a sleepover, you’ve probably partaken in staples such as “Light as a feather, stiff as a board” and using a Ouija board. It’s a rite of passage. I still remember a particularly scary sleepover that ended with us calling a priest at 2 a.m. I won’t go into the entire night, but the hot room we were playing in went so cold you could see your breath and another girl and I ended up with handprint bruises on both ankles after we felt like we were being pulled on. Since then, I’ve sworn off the mystical Ouija board–even if it says Hasbro on it.

With that in mind, let’s take a look at a few creepy classic, scary movies involving the the good, ol’ spirit board.

(1973)
Never use a Ouija board by yourself, that’s rule #1. If you break that rule, be prepared for the worst. If you’re chatting with a spirit named Captain Howdy, it’ll probably end badly. Like, humping a cross and vomiting pea soup bad. This movie is a head spinning good time!

(1983)
When a journalist purchases 112 Ocean Avenue, it pretty much ends up being the worst real estate decision he’s ever made. His daughter, Susan (played by Lori Loughlin of Full House), her friend (Meg Ryan) and their boyfriends play with a Ouija situation (not quite a board) and it indicates that Susan is in danger. So that means she’s gonna die. The movie basically ends with demons and hellfire (I know you’re surprised). Fortunately, Lori Loughlin lived another day in real life and was able to be Aunt Becky to John Stamos’s Uncle Jesse. Phew!

(1986)
This movie is so bad, it’s good. It stars Tawny Kitaen of “Bachelor Party” and Whitesnake video fame. When Linda’s ex-boyfriend (played by Patch on 80s Days of Our Lives!) brings a Ouija board to a party she’s hosting, they try to contact a spirit pal of his, David, and they get more than they bargained for. Soon, Linda discovers she is pregnant and her burgeoning addiction to contacting a spirit she believes is David will take over her life. Tawny’s character gets extremely abusive as she falls deeper and deeper under the board’s thrall and all I could think about was how she was arrested for domestic violence in real life several years ago. Maybe the Ouija board was to blame?

(2000)
Convinced she has a ghost haunting her lakeside New England home, Michelle Pfeiffer’s character, Claire Spencer, tries many different ways to communicate with the lost spirit. While her séance with a Ouija board in her bathroom is less than successful, this movie is still full of chills and thrills. Fun fact: Clark Gregg wrote the screenplay–he’s a successful actor in his own right, but he’s also married to Jennifer Grey–Baby from Dirty Dancing!

(2012)
When her mother dies and her sister and cousin disappear while planning the funeral, Annie (played by Caity Lotz, Anna Draper’s niece from Mad Men) returns to her childhood home where she once lived with her abusive mother. Strange occurrences start happening and realizing the home is haunted, she seeks the help of a psychic and of a Ouija board she draws on the floor. That should be good for the resale value.

(2011)
This found footage-style movie is low budget at its best. Five friends playing with a Ouija board neglect to say goodbye after contacting the spirit of a drowned girl, leaving the portal to the other side open. The consequences are harsh. Let’s call this a lesson learned.

(2014)
When their friend Debbie commits what initially appears to be suicide, her friends try to contact her using the Ouija Board she found in her home just prior to her death, and leads to them becoming victims of a malicious haunting. It doesn’t end well.

So there you have it, a few of my favorite movies featuring the all-knowing Ouija board! Did I miss any of your favorites? Let’s hear about it below!