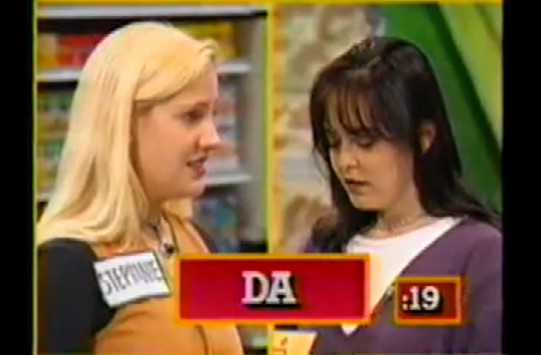 Yep, that’s me and Tyna on our TV debut in 1994 when we were on the cable game show Supermarket Sweep. Just arriving in Los Angeles after our 2 week cross country move and yet to find a job (our first day in the city was the 6.7 Northridge earthquake, talk about a welcome), we did what the unemployed do in LA; tried our luck on a game show!

We made a call and were invited down for an audition, which itself, was pretty uneventful. A few questions in front of a panel of producers and we were sent on our way. We got the call a couple of weeks later that we were chosen. I’m not sure why we were picked. My guess is that they didn’t have a whole lot of 23 year old girls auditioning and they wanted to keep their paid extras happy, as they filled the audience with them for the question portion of the game. It was an unusually large amount of men for a cable game show about supermarket shopping. And I guess we did make them happy, as you can hear from the hooting and the “right on!” yelled when we go up for our nearly disastrous Dannon segment.

While we were waiting for that glorious call from the producers, we both filled out job applications and had interviews at separate places. We then got the call that we were chosen to be on Sweep, which was set to tape in 2 weeks. And of course, within those 2 weeks we both got the jobs we applied for! We each had to have a very uncomfortable conversation with our soon-to be-bosses that yes, we accepted the position…but here’s the thing, we needed a day off to tape a game show…during our first week of work. Amazingly, they both said yes (it was Hollywood after all). The jobs that we say we do on the show are the jobs that we both just got!

So there we are, at the Hollywood Center Studios, bright and early for our taping with at least 75 other people. They taped the beginning of the show first, where they call out “Whose got the Puffs tissues? Ok, you’re on!” All the people you see in the audience for that segment are actually contestants in other episodes. Once those are all taped, they clear us out and fill the audience with the paid extras (the above said men) who get to watch who knows how many episodes tape and have to clap all day long. I think they got paid 20 bucks each. Hell of a way to pay the rent.

The contestants then wait for their episode to film. We knew who we were going to be on with and spent some time talking with them (both teams very nice) but didn’t want to get too chummy because we planned on kicking their asses later! So we just sat, got nervous, and pouted about our outfits. We couldn’t wear black and we had to wear sneakers, neither point made us very happy. Little did we know we would end up getting the YELLOW sweatshirts for the big sweep. Who looks good in yellow? Then we really had something to pout about!

When it was finally time for us to tape, we were given a 10 minute walk through of the market to plan our strategy for the big sweep, the end when one contestant from each team gets to run through the isles and shop. The set was really amazing, an actual supermarket with real products. The only thing that was fake was the produce. We carefully planned the course for our sure to be victory. We decided the housewares and spice isle was a good place to start. Batteries, film, spices, colanders-these were all high-priced items that were small and lightweight. We had seen way too many people over the years trying to wrangle turkeys in their baskets. One bottle of saffron costs about the same as a turkey, it was a no brainer (of course, this doesn’t explain why I choose those enormous hunks of cheese.) You’re allowed to get 5 of any one item and there are several things you can do to add to your total. Big blow up items, 1 lb of candy, and a bag of rolls from the bakery with very specific instructions (for example, 1 bagel, 2 kaisers, 3 wheat buns). You’re also allowed to run back and exchange carts for an empty one at anytime throughout your sweep.

And a little inside scoop on the store, the floors were waxed to the consistency of an ice skating rink. And if you dropped anything and didn’t either put it in your cart or back on the shelf, it was deducted from your total. And the carts were not the clunkers you find at your local market. They were sleek and fast! The combo was very challenging.

Strategy set, we are all automatically given 1:30 minutes for our sweep, and we were ready to play the game. And that’s where everything went a little wrong. We bombed, big time. Tyna gets total Cindy Brady red light syndrome. We edited the episode to show only the answers we get right. This is why it’s only 4 minutes. I get one answer, which adds 10 seconds to our sweep time. Tyna smiles blankly into the camera for the entire question segment and somehow forgets all words that start with the letter N. Thank god we pulled that one off, because it gave us another 30 seconds to our time. If we would have lost it, I don’t know if you’d be reading this right now. I may have killed Tyna.

We manage to eek out an abysmal 2:10, with the other 2 teams having 2:50 and 3:00 from all their correct answers. We’re very embarrassed at this point. The sweep starts and you wouldn’t believe how quickly 2:10 minutes flies by, very stressfully so. You’ve got a camera man following your every move. You’re trying desperately to not fall down or plow into a display. And I was racking my brain to remember what baked goods I needed. No time for candy, and I didn’t run into any blow up items on the way.

We didn’t just lose, we came in 3rd. We were given a catalog of consolation prizes that we could each pick something from. We chose a scale and a cassette radio, I still have both! Sorry Tyna, I stole your scale when I moved. Moral of the story? Game shows are A LOT harder than they look!Supermarket Sweep

stef
Stef is a plethora of things. Amongst them: co-founder of we heart this, photographer, condiment connoisseur, Philly girl in the California desert, borderline hoarder and a hardcore beauty junkie. She also has a touch of wanderlust and, arguably, the cutest dog in the whole world...
skin tone: NC 25/30
skin type: oily with a fear of rosacea
favorite beauty product: high end skincare and lip products

Latest posts by stef (see all)