We’re giddy with anticipation over the return of Glee to our television sets on Wednesday, April 13th! And you know how we are over our beloved television shows here at we heart this. We’ve got posts all week long celebrating the magic of Glee. Just like a Peanut Butter Cup, Glee takes two great tastes (in this case the awesomeness of a musical and the angsty high of teen drama-dies) and brings them together for one spectacular result. So, even you if are not a fan of Glee (though hopefully we’ll have you converted soon) join us as we celebrate the comeback of Glee with more teen age pop culture then an old issue of Sassy! Review team member Kellie starts us off with a spot on look at just why this musical hour fills our hearts with glee…

What were you like in high school? Were you a jock, a nerd, a cheerleader, or perhaps something else? High school was such a tumultuous time for most of us. The exhilarating and often painful moments that were experienced in those hallowed halls seem to be the catalyst for self-discovery and for figuring out where you belong. As a young person, I definitely marched to the beat of my own drummer and was somewhat of a geek. Of course these are not bad qualities to have. But sadly, teenagers typically treat those who are different with the kiss of death. Consequently, I often felt awkward, lonely, and lacked confidence during this period of time. But everything suddenly changed for me once I joined my school’s show choir. There, I found a home where for the first time I felt free to be myself and to nurture my creativity.

For those of you not in the know, show choirs are song and dance groups who perform from a variety of musical genres for entertainment and sometimes competitions. Haven’t heard of show choir? Perhaps you know it by its now more famous moniker—glee.

Unless you have been living under a rock for the past year, you have at least heard about Fox’s smash hit television series Glee. The show is beloved across the nation and is quickly developing converts around the world. The fledgling show already has merchandise, a tour, and even an invite to the White House Easter Egg Roll, among other things. Normally, I’m turned off by this type of commercial success. But I simply cannot deny my love for this little gem. I am here today to tell you why I heart Glee.

Glee is a dramedy co-created by Ryan Murphy (who is also known for his other well-regarded series Nip/Tuck and Popular) that debuted in 2009. It is set at the fictional William McKinley High School in Lima, Ohio. The series centers on the trials and tribulations of members of the school’s glee club, “New Directions”. Glee is a vivid and accurate portrayal of the agony and ecstasy of high school. But don’t let the high school setting fool you into believing that this series is all about teenagers. There is, in my opinion, an equally compelling adult-driven story line. Aesthetically and emotionally, Glee often reminds me of a John Waters film with its bright colors, awesome music, kooky villains, offbeat underdogs, and immense heart.

The series is rightfully known for its amazing musical numbers. Ryan Murphy has a real knack for having the right mix of show tunes and contemporary songs represented on the show. I was consistently amazed last year by the unusual and outstanding cast covers of songs by artists ranging from Journey to Amy Winehouse. The return of the show this month should bring some amazing Madonna and Lady Gaga covers. Regardless of how bleak my mood is, this music puts a smile on my face and I can’t help but sing.

At first glance, it might be easy to dismiss Glee as fluff. There are musical numbers. There are a lot of people dressed in vivid candy-colored hues. And on the surface, some of the characters could appear to be stereotypes. Fortunately, the wonderful cast deftly brings their characters to life. I am particularly in awe of the marvelous Jane Lynch, who plays the cheerleading coach and arch-nemesis of the glee club to a hilarious “T”. I am here to tell you that this show has a lot of heart underneath its shiny façade.

At its core, Glee is about the joy and the pain of finding out who you are and owning it. I can so clearly relate to the journey of the glee club kids as they struggle to figure it all out. And as a 33-year-old, I can equally appreciate that the adult characters on the show are struggling just the same. I am still a geek who is happily trying to figure it all out. Glee is a fun and nostalgic reminder for me of who I was, who I am, and who I hope to be.

Will you be watching when Glee returns on April 13th? I know that I will be—and I’ll be singing along! 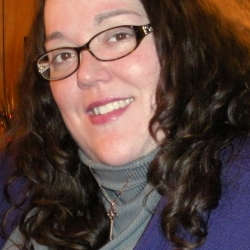 kellie76
Kellie is a perpetual grad student, glamorous geek and writer. She hopes to one day soon add the title of history teacher to her repertoire. She resides in the frozen tundra of Northeast Ohio and is an avid consumer of books, tv, music, video games, beauty stuff, and accessories.
skin tone: NC15
skin type: oily and acne prone
favorite beauty product: lip products and face primers

Latest posts by kellie76 (see all)

22 thoughts on “we heart Glee”