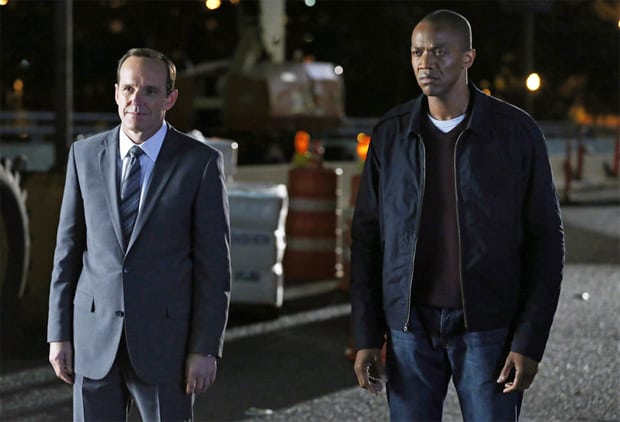 It’s midseason finale/cliff-hanger time, guys, so we got an extra dose of drama – meaning explosions of both the literal and emotional variety. We also saw the return of Mike Peterson, last seen destroying Union Station (like a boss) in the pilot episode. And the Coulson/Tahiti stuff is SO CLOSE to being addressed. Finally, some threads that have been just kind of hanging out, all raggedy and pointless, are starting to weave together. I think. Don’t quote me on that, though. I mean, I’m no clairvoyant (see what I did there? I’m sorry).

Mike Peterson, still retaining his super-human centipede strength, has been training with SHIELD – this means, essentially, that he’s gotten really buff via doing things like pushing bulldozers across a football field. He’s also learned to tame that fiery temper and is all about being a good guy now. He’s a really likeable character, actually, so I hope you didn’t get too attached, because his fate hangs in the balance. But more on that in a second…

We open with a jail break situation; a bunch of soldiers bomb a prison, attack the guards, and pull out a creepy prisoner. If he looks familiar, that’s because he’s the man that consulted with the flower-dress girl, Reina, from earlier this season. And yes, it’s later revealed that he totally stabbed someone’s eyes out during a dinner and then resumed eating. I presumed he wiped off the knife before he continued cutting his steak, but I’m into hygiene and whatnot.

Meanwhile, the SHIELD agents are hanging on the jet. Skye is still trying to track down her mother and asks Coulson for help; he tells her that he’s asked May to look at some intel for her. May, however, is busy sparring with Ward. I hate the phrase ‘sexual tension’ but yeah, totally applies here. Coulson interrupts them, though, and calls the gang together to discuss the prison break-in. Turns out the soldiers are of the Centipede variety, and the man they rescued, Po, seems to be the brains of the operation. In order to track them down and try to take them out (which hasn’t gone so well, in the past) Coulson recruits Mike – they’re going to “fight fire with fire.”

Mike is totally down with this and promises Coulson that he won’t let him down. Also totally down with the new recruit is Simmons, who giggles, blushes, and basically drools over him in a VERY unscientific manner. Mike is grateful to Simmons and Fitz; he tells them that the weapon they created, the one that immobilized him, saved his life – it somehow froze him or something before he could go off like a Roman candle. He’s equally grateful to the whole team – because of them, he survived and has a second chance. Now, he just wants to make his son, Ace, proud. Ace can’t know that his dad is working for SHIELD, though, so he’s currently living with Mike’s sister in blissful ignorance.

As Mike is getting settled in, Coulson tells May that Skye might be coming to her for mother intel. You know, because he keeps lying to Skye about that. May, understandably, is pissed. When Skye tries to prime May for info, May brushes her off – subtlety is not this chick’s strong suit. Instead, Skye pulls up old footage from when Reina met with Po in the prison; Mike immediately recognizes her as his original recruiter into the Centipede project. They also are able to reconstruct one phrase from Po, using a lip reading program: “The clairvoyant does not like to be touched.”

After using a “woot! Lottery winner!” ruse, Ward and Coulson then track down one of the super-soldiers at the new Centipede lab location and bring Mike, May, and Ward along. What they don’t know is that Reina and Po have already anticipated their arrival – SABOTAGE. Mike might be strong and all, but have you seen the other dudes? They have those centipede implants everywhere, and Coulson’s zappy gun isn’t cutting it. May and Ward are bested by the soldiers, Coulson gets knocked down, and even Michael almost bites it. He regroups enough to save Coulson and subdue one of the soldiers; when he and Coulson confront him, a remote kill switch is thrown and the soldier dies – it’s the same ocular stuff from that eyeball-centric episode that shall not be named – lest I get too grossed out to finish this recap. But see, threads coming together, right?

Back in the lab, Skye tells them she can’t track the ocular feed like she did previously; there’s no access. Meanwhile, cut to creepy Po and Reina talking about the clairvoyant, whom Po has just spoken with. Reina is fan-girling out over the clairvoyant and wants to meet him/her, but Po is like, nope, ‘cause then I’d have to cut your eyeballs out and that’s a shame because they’re so pretty. Ugh, let’s get back to the less eye-obsessed agents.

May is reaming Ward out because she thinks he took a punch for her during the fight, but Ward insists it was just tactical maneuvers, nothing more. “Don’t flatter yourself,” he snaps, walking away. This leaves May in a foul mood, so when Skye walks in and starts pestering for info again, May lashes out. She tells Skye that Coulson has been lying to her and almost spills the beans, but she catches herself and instead tells Skye she needs to make a choice – if Skye can’t put aside her personal attachments, then she shouldn’t be a part of SHIELD – Skye flees to her room and bawls.

Coulson pulls in Mike and has a heart to heart about why Mike hasn’t seen his son for months. Mike confesses that the last time Ace saw him, he was acting like a literal monster. Coulson tells Mike that being in SHIELD is a hard-knock life – no PTA or family holiday dinners – but Mike does have a son, and he needs to think about his choice very carefully. Mike then calls Ace and tells him he’s going to visit, except surprise – SABOTAGE. AGAIN. Reina is actually with poor Ace; she’s using him as a bargaining chip: she’ll trade Ace for Mike. If not, the kid gets it. No interference, no tracking devices, just Mike. Fitz-Simmons, however, have an odorless scent available that they can use to track him and buy some time. Of course they do.

Coulson goes with Mike to the swap point, with the rest of the team waiting in the wings. The swap is all ready to go when…SABOTAGE. (That’s the last time I’ll say that, I swear). Mike has double-crossed Coulson; Reina wants Coulson, not Mike after all, and Mike had to comply in order to save his son. Mike struggles with his decision and even tries to choke Reina out, but Coulson tells him to let it go and that he made the only decision he could have.

So Ace is returned: Mike runs Ace to Skye and then books it back towards the meeting point, where Coulson is injected with something and being hauled off. And then, in true finale style, everything goes boom, including, presumably, Mike. For a second it looks like maybe Coulson bit it too, but then the team sees a copter fleeing the scene. And in that copter? Coulson and Reina. Coulson tells Reina he’ll never give her what she wants, whatever it is. Her reply? “We want you to tell us about the day after you died.” Um, yeah, Reina, we ALL want to know what’s up with that, so thanks I guess?

In a few weeks we’ll see (WE BETTER SEE) what happened in Tahiti and if Mike is truly a goner, when AOS resumes.

we heartsters – Predictions? Who/what is the clairvoyant? Ward totally took that punch for May because he hearts her, right? And is it just me or did you also kind of like Skye this episode?