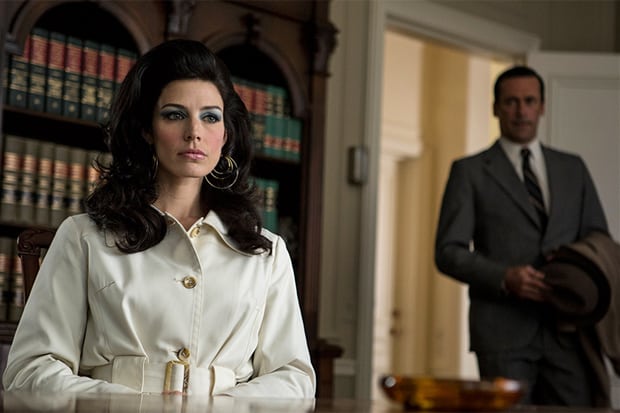 Transactions are the name of the game this week, tying in perfectly to the episode title “New Business.” Everyone’s out to beg, barter or steal what they want, or what they feel they are owed – some returns are tangible, like money or sex, but others are more ephemeral in nature; it’s hard to put a price on dignity, or regret, or grief. Let’s see how many ways we can split this bill.

Don, Diana, and Megan: After seeing the boys, Betty and Henry, Don is reminded of the family life he no longer has. (Plus, Betty is going to pursue a Master’s degree in psychology and I really want her thesis project to be titled “Shooting the Neighbor’s Doves While Smoking: A Exploration of Marital Constraints”).

Don’s divorce to Megan is at the financial stage, and there’s aggressive lawyering going on. Megan leans on her family for support, bringing her mother and sister to NYC so they can help her pickup her clothes and furniture. My personal favorite line here is when Marie spies the wine stain on the carpet and sniffs, “It’s a wonder you don’t have syphilis!” 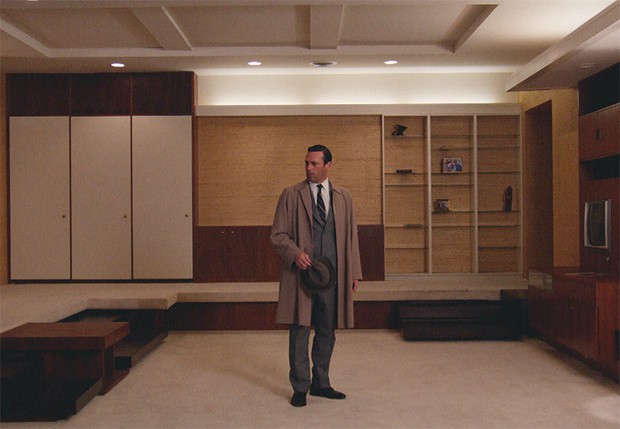 This “support system” backfires a bit – Megan calls her weepy sister a “ghoul” and Marie ends up jacking ALL of Don’s furniture. We’re talking a serious “How the Grinch Stole Christmas” situation. Marie calls Roger to help foot the bill, and then she pays him back fully – in the obvious way, but in addition she is apparently leaving Megan’s father, so Roger gets a…bonus there.

Megan enters a transaction of a different kind when she meets Harry for lunch – she seems to think he has all this genius agent-y advice for her. GIRL, NO. After gushing over her beauty, Harry puts a hammy paw on her and suggests they conduct their business upstairs, in his room. Megan flatly tells him she’s not interested, calmly swills the rest of her wine, and stalks out.

She is in no mood to negotiate when meeting with Don and his lawyer to work out settlement details, but can’t help calling him out: “Why did I ever believe you…You’re nothing but a liar. An aging, sloppy, selfish liar.” Don counters by apologizing and offering her a whopping pay out via a million dollar check. That won’t buy Megan back her innocence, but damn, a million dollars? Don’s guilt is worth a fortune, apparently. 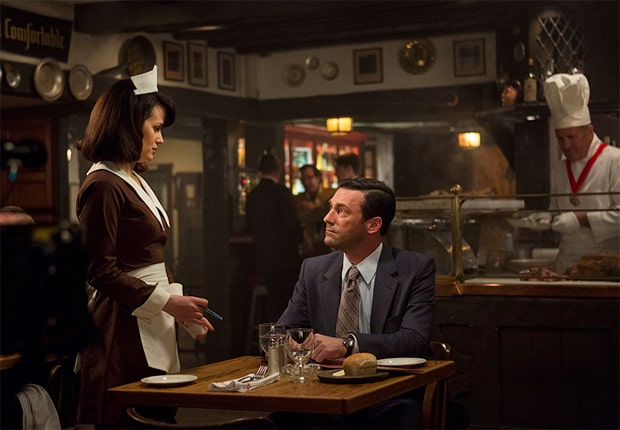 Part of this fortune seems linked to Don’s new lover, Diana; it seems as though he wants to be free and clear to move on with her, Megan’s opposite. If Megan always seems suffused with light, Diane is shadowed and subdued. He tracks her down to the new restaurant where she waitresses and learns that she had left NYC and gone back home to Wisconsin to get a divorce. Now, she’s back, and she is drawn to Don’s darkness, capitulating to him with a casual fatalism. She’s broken and blank, a virtual bruise of a woman, and when she confides to Don that her daughter died of the flu two years ago, her darkness makes sense.

Don’s deep pull towards her makes sense, too: her sorrow emanates from her like bitter perfume, and he just can’t help but inhale. When they are in bed together, he sniffs her hair and asks what the scent is, and she says, “Shampoo. Avon…I bought it in my ranch house, with my two car garage.” Such a safe, pedestrian, American-family litany of her old life, a life that Don once had with Betty. Really, many of the Mad Men characters were pursuing that life when the series began, and now those good old days are long gone. That shampoo is a Proustian touch, almost an olfactory elegy for what life was, once upon a time.

The plot thickens, however, when Diane tells Don that she actually has a surviving daughter, a daughter that she left behind. She asks Don if he wants to know why she left her daughter, but Don says he doesn’t. And then Diane ends things: “I told you about my heart. I don’t want to feel anything else. When I was with you, I forgot about her – I don’t ever want to do that.” It’s a bit ironic that Don has been the analgesic for Diane, since it’s usually the woman providing the pain-killing power for him. Don leaves without a fight, but I get the feeling their story is not over, and I’m curious to see how this will play out. Peggy/Stan/Pima: So, I’ve always harbored hope that Stan and Peggy will end up together. They don’t make sense on paper, but there’s always been something there, barely glimmering, between them. Here, that something between them (haha) is Pima, an Annie Hall-ish photographer Peggy hires for a Cinzano advertisement. (Sidebar: Pima is played by Mimi Rodgers, aka the ex-Mrs. Cruise, and she is pulling some Dorian Gray realness). Pima is all about making transactions – she plays on Stan’s desire to be a talented photographer, and she attempt to ingratiate herself with Peggy, the boss of this operation. After seducing Stan in the darkroom, she moves on to Peggy, all “Let me take your picture.” Pegs is flustered and seemingly flattered, but as it becomes clear that Stan was also given the Pima treatment, Peggy announces that Pima is a “hustler” and that she won’t be getting any more agency jobs. It’s an interesting callback to the last episode, where Joan was objectified; here, Peggy is experiencing a variation on that theme.

Extra Musings:
* Y’all know I hate Pete, but I felt a tiny bit sorry for him when he told Don, “Jiminy Christmas. You think you’re going to begin your life over and do it right. But what if you never get past the beginning again?”

** Betty’s explanation of why she is interested in psychology: “They [people] seek me out to share their confidences.” (Flashback to Betty snipping a lock of her hair for Glen – the first thing Betty needs to study are BOUNDARIES).

*** Meredith wants to know how Harry sleeps at night in California, what with all those Manson “brothers” running around.

we heartsters: Do you want Diane to stick around? Are you ready to book a counseling session with Betty? Anyone else ship Peggy and Stan?