Bread pudding seems to evoke strong feelings from people. It definitely has its fans, people who find comfort in the warm, decadent dessert with pour-over sauce.

Sadly, I have encountered just as many people who wince at the very thought, thinking of mushy slabs dotted with the great dessert ruiner – raisins.

For a very long time I fell into the latter camp, less due to a texture aversion than a raisin aversion, thinking”bread pudding” was synonymous with “raisin dessert”. 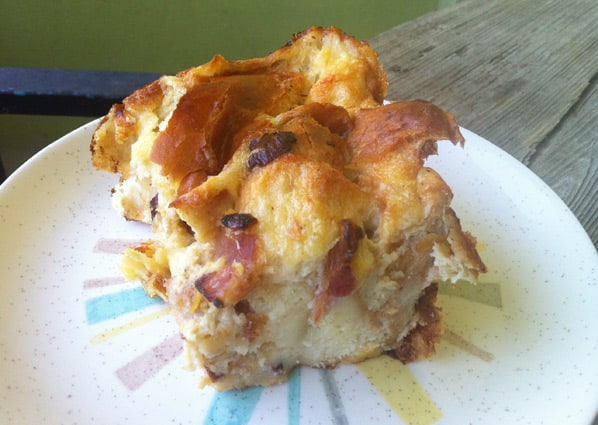 To bread pudding detractors, I have the secret to changing your bread pudding-hating ways, the gateway bread pudding if you will. It is rich, hearty and comforting, just as any good bread pudding should be. It is also savory – which conveniently solves the raisin problem.

I have a sneaking suspicion that savory bread pudding might just be stuffing in disguise, but if that’s what it takes to allow stuffing to be consumed at non-Thanksgiving times, count me in.

This savory bread pudding recipe has a distinct breakfast-y slant from adding bacon (or sausage) and my favorite secret weapon ingredient, leeks. 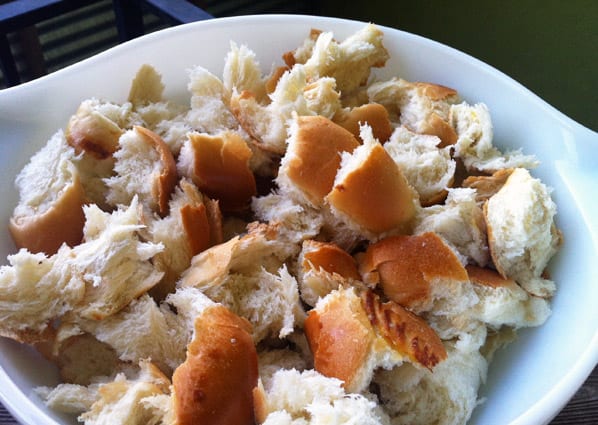 Note: Bread pudding requires stale pieces of bread to properly soak up the liquid ingredients without turning into a sad mush pile. Prepare your bread the day before by tearing it into rough 1/2 inch chunks. Leave uncovered in a bowl overnight to get stale.

2. Pour milk into a medium saucepan and add minced garlic and black pepper. Heat on high until just before it simmers. (Do not let it come to a boil!) Take off the heat and set aside to cool. Tip: Have we talked about how to properly clean leeks before? They’re sneaky little devils, hiding dirt into their tight round rings. The most effective way to clean them is to chop them first, then put them in a large bowl and fill it with cold water. Gently pull apart the submerged rings and swirl them around in the water. Let the water settle (which also lets any dirt settle to the bottom of the bowl) and then drain the leeks. Voila! 4. Cook the bacon and leeks together in a large skillet on medium high until bacon is crisped, approximately 10 minutes. If you’re having issues with sticking, add a small bit of olive oil or butter to the skillet.

5. Crack the eggs into a large bowl and whisk to combine. Add the cooled milk and cheese and stir to mix.

6. Stir the bacon and leek mixture into the egg mixture.

7. Add the bread chunks and stir to combine. Pour the contents of the bowl into the buttered baking dish, and use the back of a wooden spoon to push down the top of the bread, making sure all pieces have been soaked with egg mixture. 8. Bake for 35 minutes until golden brown. The pudding should rise as it cooks. Stick a toothpick in the center and make sure no uncooked egg sticks to make sure it is done. This breakfast version doesn’t come with a sauce to pour over it like dessert versions, but if you’re really feeling decadent a nice hollandaise (while totally unnecessary) would pair well.

The great thing about this dish is that it is filling enough to easily feed a crowd. Chop up some fruit, grab mimosa ingredients, and consider your brunch hosting duties covered.

we heartsters; Bread Pudding – Yea or Nay? And if it’s a “nay” would you try this recipe?

photos: Heather for we heart this

Heather is a midwesterner living in Los Angeles and enjoys concocting weird flavor combinations and exploring delicious ethnic foods. She blogs at foodforfunandpleasure and knows her way around the spice cabinet like nobody’s business.