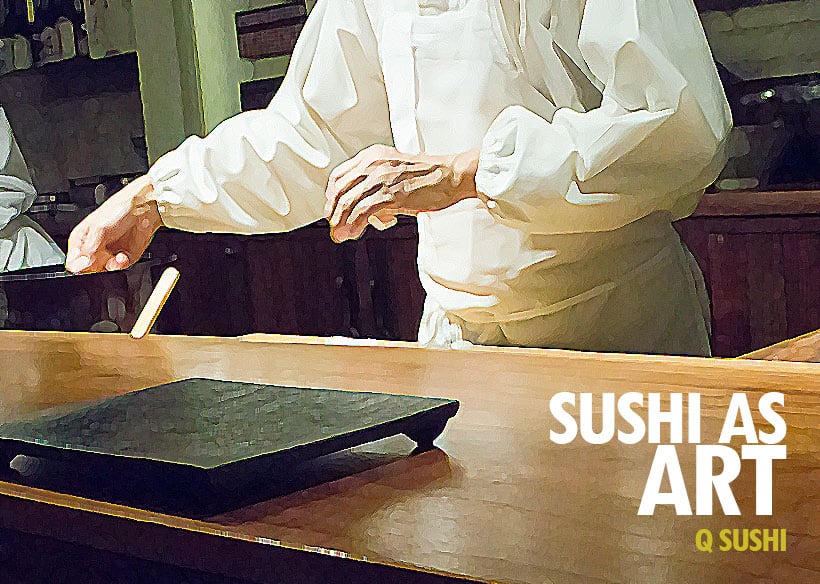 The chef’s hands seem to float through his workspace as he deftly prepares my next selection. He scoops rice into his palm and with the perfect amount of pressure and ritual-like movement forms the base for which comes next. Wild King Salmon from Alaska is laid on the wooden slab, its fluorescent orange hue shining under the globe pendulum lights. The chef slides a knife through it, then tops the rice with the result. It’s laid before me with a nod followed by a waitress who swoops in from behind and fills my sake cup, and is gone before I can even thank her. 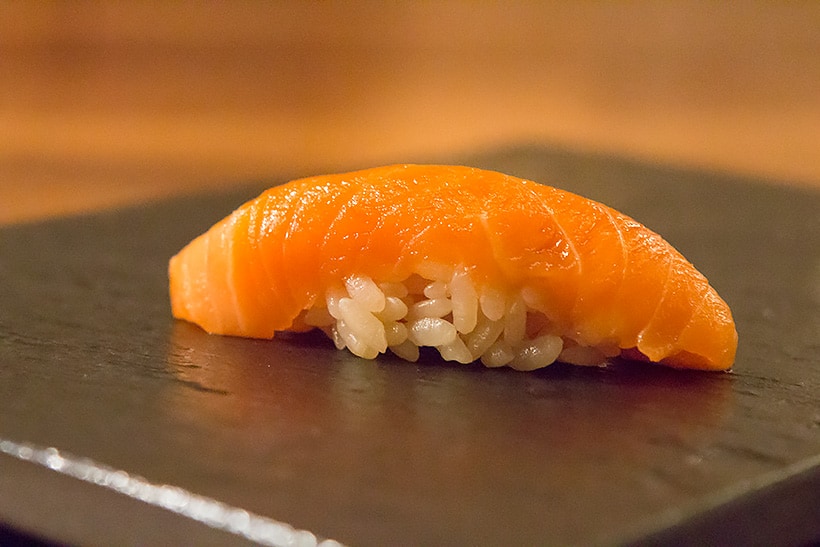 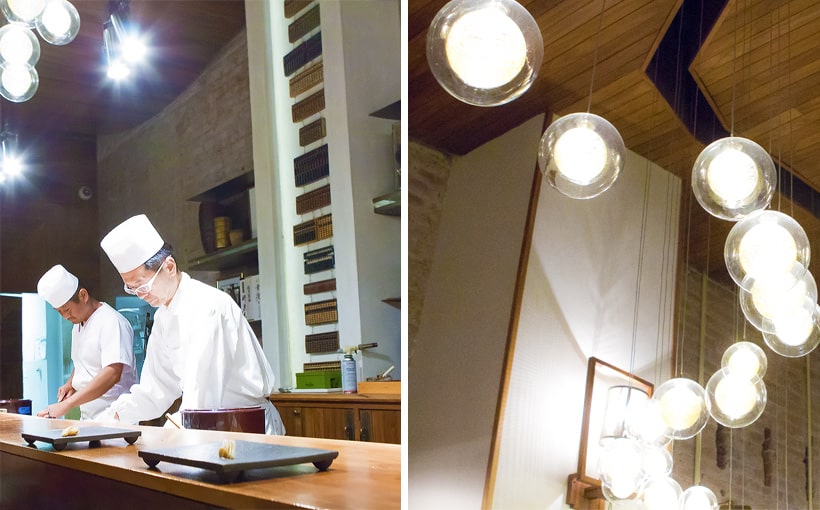 This is sushi as art. Or is it art as sushi? It’s what you can expect from Q Sushi in downtown Los Angeles; the most exquisite sushi meal I have ever experienced.

You might not expect to see the word “exquisite” in a restaurant review. Unless of course, you’re familiar with Q Sushi and its maestro Chef Hiroyuki Naruke. This was my second visit and I was no less delighted than I was the first time. 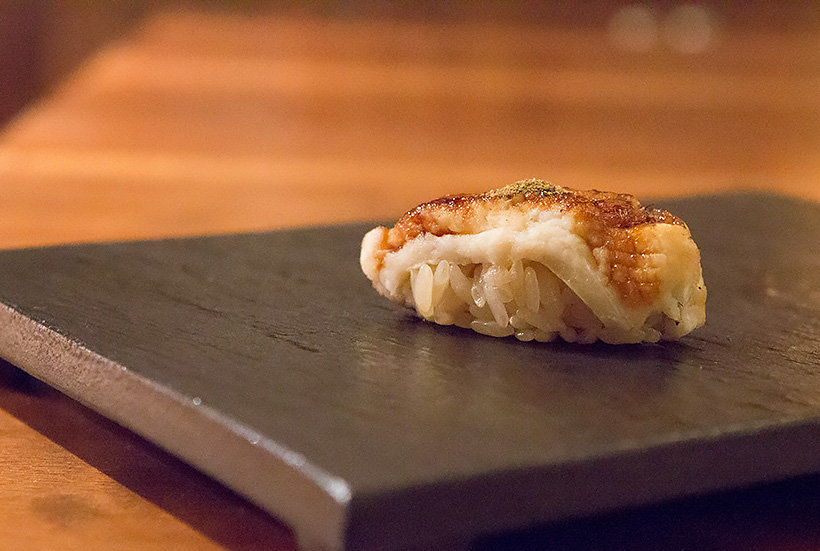 Chef Hiro has been perfecting his craft for over 25 years. He and his wife Kyoko opened Q Sushi upon the urging of a trio of devoted patrons from his 6-seat Tokyo restaurant. With it he brought traditional, simplistic Edomae-style sushi to LA. 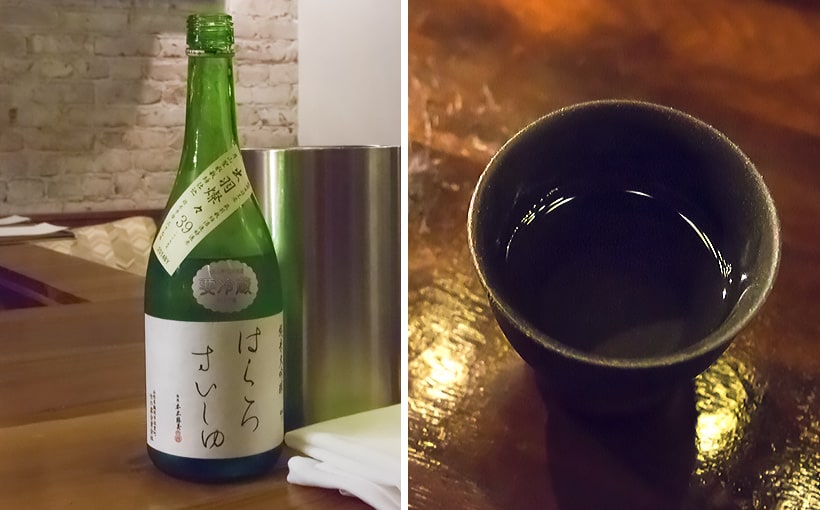 It’s Omakase style, meaning chef’s choice. But if there’s one chef whose choice you should trust, it’s Chef Hiro. Expect 20 courses per full meal, beginning with perfectly-sauced tsumami (small appetizers), then heading into sashimi and nigiri sushi. The fish may be aged, cured, served slightly warm or chillingly cold. And then there’s the rice; tender and seasoned with a perfect balance of red vinegar (brewed from aged sake cakes) and sea salt, never sugar. If Chef Hiro opened a restaurant serving only this rice, I’d be a regular. You would to. But as much as I love the rice, the fish is the star of the show. On this visit we were served the Botan option, Q sushi’s premium menu that requires at least a 48 hours notice in order to source the fish. Our meal spanned the globe, literally. Traveling almost 15 hours by plane was Japanese Skipback Tuna, served in the tsumami course with onion sauce, Striped Jack and Saba (Mackerel) sushi, which the Chef told me was his favorite. Another international selection was New Zealand Black Snapper sushi, a fish that was as delectable as it was beautiful, with silvery skin and nearly see through flesh. 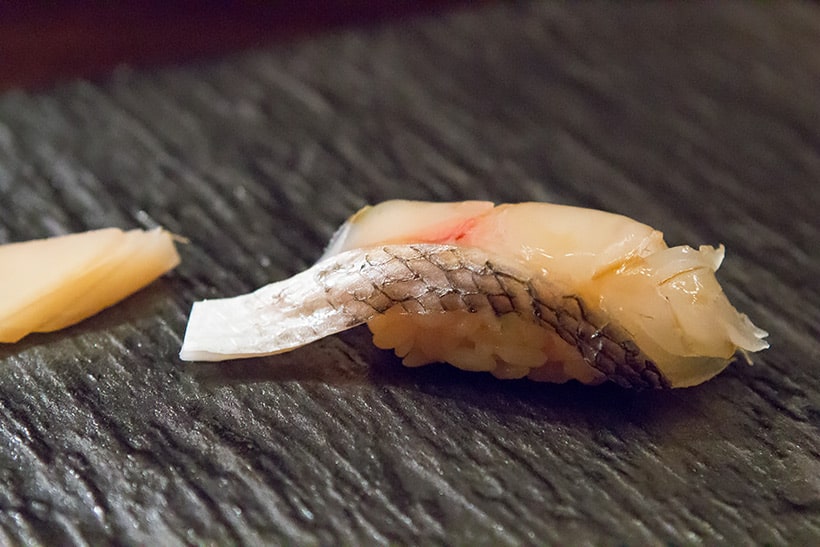 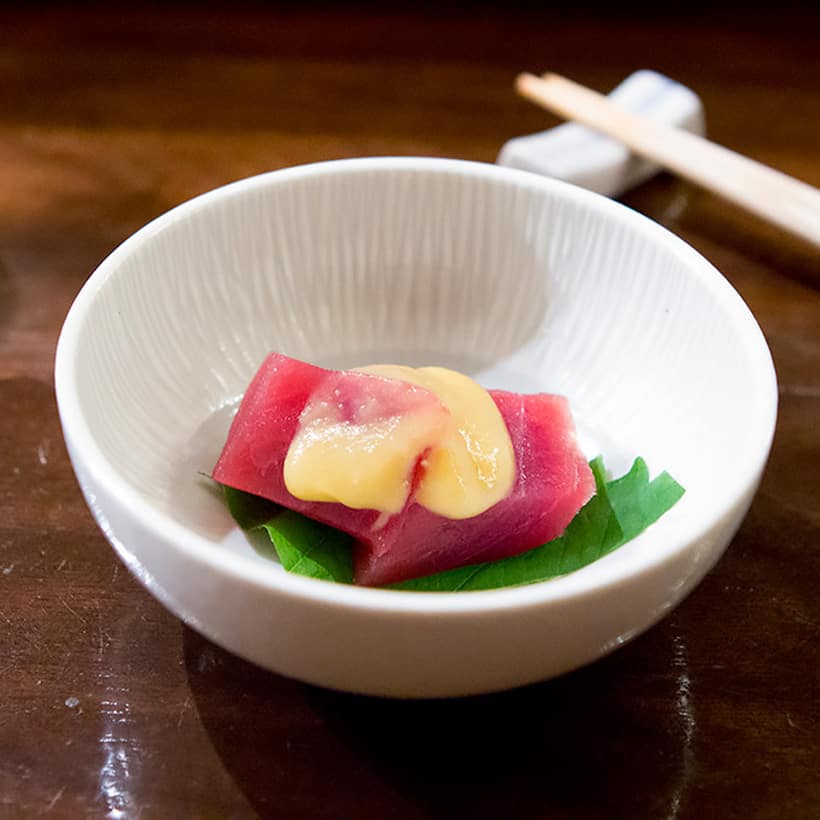 Ending all meals is Tamago, an egg desert. Chef’s recipe is comprised of 60% shrimp, 30% egg and 10% sugar. It’s unassuming, yet masterful, a technique that all Chef Hiro fans come to understand. And crave, intensely crave… 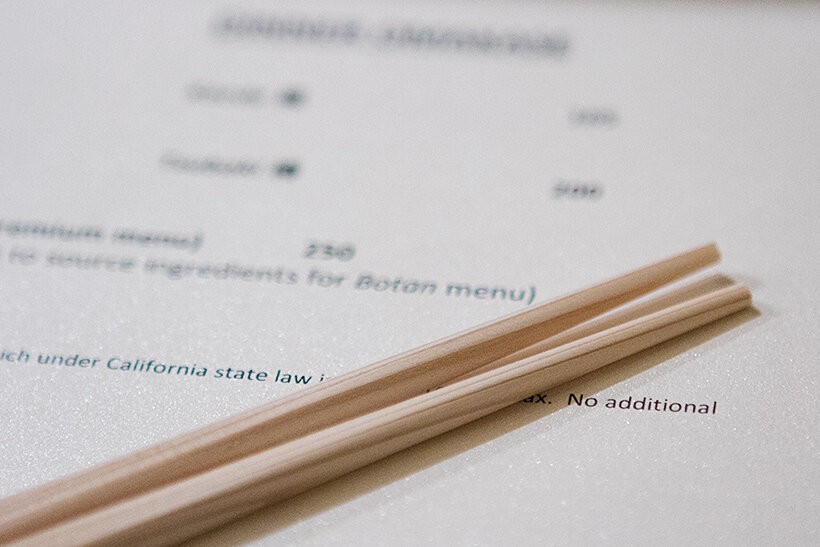